Chris M. on a loop around Ballantree-Lost Lake-Brother’s Creek:
“Eugene, Chris & Doug joined me for a fun little outing above the British Properties on Sunday. There was discussion beforehand about what footwear aid would be best. Two of us brought snowshoes, one microspikes and one just boots. We started on Ballantree with no snow whatsoever. After we left the trail and passed old mountain bike jump constructions the snow became a nuisance. Thin bridges and layers were broken through very easily. The snowshoers were happier than the other two. Just before joining in with the Brother’s Creek fire road trail we came across a nice grove of old growth trees. Soon after we reached Lost Lake, which was completely fogged in. For the way down we stayed on the west side of Brother’s Creek until we reached the Baden Powell. Then turned east and enjoyed a snow-free walk back to the car. Along the way passing some nice forest sections. Total walking time of around 4 hours.” 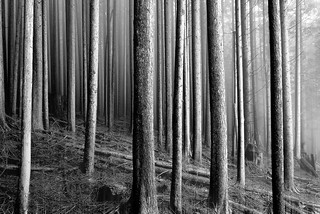