Chris M. winter camping at Garibaldi Lake:
“We broke trail the entire way. Along the road, up the trail, in the meadows and up the ridge. Around 25 km round trip. Scott and Ian were in snowshoes. I skied. I was so tired I buried my heavy tent at the 4-km marker and decided to sleep in the shelter. We missed sunset. Exhausted, we played cards, went to sleep early and still we missed sunrise. We woke up to frozen ski boots and gaiters. After skinning up the ridge, just as the views opened up, along they came including Robert!? – a Wanderung member who decided our tracks looked better than breaking trail over to Panorama. Smart choice. After stopping with a beautiful view of Black Tusk another Wanderunger, Adrien showed up!! The morning had been a bright blue but the clouds now started to roll in. Skiing down in 2 feet of powder was dreamy.” 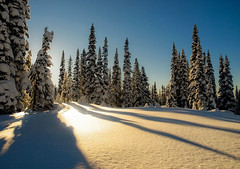