Rob M. at Elfin Lakes:
“We made it to the unploughed upper parking lot. One car had slid off the road into the forest – a bit of bumper and windshield visible – driver frantic on the cell phone. We seemed to be the first, breaking a snowshoe trail out to the hut. Progress was slow and draining. From the high stilted outhouse at Red Heather I could see that the poled winter route hadn’t been set. The narrow trail followed the summer route without any avi risk. We arrived quite late at the Elfin Lakes Hut feeling a little trashed. Sadly there were no tracks leading up Columnar Peak/Gargoyles saddle. Time worked against our intent of tenting out on the saddle, Columnar Peaks or ideally up on Little Diamond Head. The trump card was yet to be played.

With less than two hours of daylight a couple of skiers headed out towards the saddle but gave up breaking trail 1 km beyond the shelter. At the shelter I saw three grommets had broken loose from the metal frame of my MSR snowshoes. That and the oversized winter pack were probably the cause of some shooting pains in my hip. Three steps in 1.5 metre snow from the hut there was a collective feeling that we didn’t consume enough power gels to get us to the saddle.

A half hour later Glen tells us that his bivy setup probably wouldn’t work. The temperature was -15 and dropping – colder with the wind chill and worse at higher exposed elevations. We quickly found a spot in the meadows at the base of Columnar Peaks and began digging out a campsite and talked about what to do if the temperature went south of -20. Two of us ended up sharing a 4 season Hilleberg tent and with a bit of tweaking, everyone survived the night – woken once by the sound of snow drilling our tents; and once by the unmistakable sound of a woomph and a slide coming down the Gargoyles.

We took a mellow, get lost and smell the flowers pace back to the parking lot passing more than 50 skiers/snowboarders on Paul Ridge near Round Mountain. The trail was now a super highway. A pint and burger in town and we were home.” 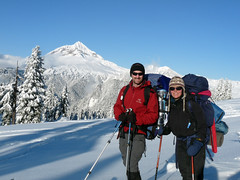