Roberto at the Pacific Rim National Park, Tofino:
“A few managed the first ferry and had a taste of Long Beach and Tofino before the second group arrived around noon Saturday. Given the many diversions along the way – the many majestic lakes, Wally Creek, Cathedral Forest, petroglyphs etc. – it’s always amazing that we even get to Pacific Rim. The hostel was barebones but assumed a homey feeling very quickly.

The first beach head was found through Tonquin Park on the north-west corner of Tofino. Hopping over the construction “stay out” barrier we proceeded to the beach head. Orcas and Greys can be seen from here on a good day. The tide prevented us from visiting caves carved out by legendary Tofino storms. We later visited a very cold and windy Long Beach and took in its austere minimalism – miles of beach, ocean and sky.

On Sunday, a native drove us to Meares Island, arranged on a chance meeting and a handshake, stopping to show us eagles and seals along the way – the whales being further out at that time of day. Without a dock, a smaller boat had to shuttle us to the trailhead where we had to jump onto a mussel-encrusted rock nearby. Finding the circumferal trail from the boardwalk involved some unexpected rainforest bushwacking but once found, the arboreal wilderness, replete with exotic bird calls, began to weave its magic with ooohs and aahhhs in this grove of 1000 year old cedars and hemlocks.

Six of us went off for an afternoon, group rate, kayak paddle in Clayoquot Sound and three went off to roam the beachheads and other arboreal trails. The rental company was comfortable enough with our skills to allow us a self guided tour around the sound after giving us a verbal snapshot of the area. Aside from struggling out of a sizeable whirlpool, the paddle was a leisurely tour around the countless islands under an azure sky.

On the recommendation of one of the locales we had an amazing meal at a local pub before heading head the next day. The return ride revisited the raw beauty and immense scale of some of the inlands lakes of Vancouver Island. I’m looking forward to reposting this event in the summer and stormy November.” 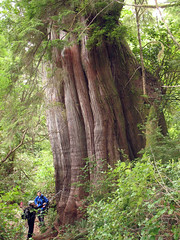