Dennis K. in Singing Pass:
“After a long hiatus from Wanderung, but not hiking, I decided to post a callout for this day hike of Singing Pass & the Musical Bumps. I have to admit it’s quite an ambitious objective for all but those in great fitness. Seven other people signed up for this hike. Unfortunately, two of them dropped out, one due to a legitimate illness, the other due to inclement weather?

The trail was in great condition. All the way to Singing Pass it was generally firm snow, but still had a bit of cushion underfoot which was ideal for snowshoes and skis (unlike the hard-packed concrete conditions you sometimes get on Seymour/Hollyburn). Although the BC Parks websites posts warnings for creek crossings, these have long been covered by snow.

I was lucky to get a really good group that was in great fitness and we were making great time as we approached Singing Pass. Unfortunately, one of our group was not feeling well and had to turn back. Two others joined her. Myself and two others continued to Singing Pass but since visibility was poor it was judged not worthwhile to continue over the Musical Bumps. Instead, we turned back and joined the others in the Village for a well deserved beer and a meal. All in all I was happy I got out. Rain or shine I never regret getting out for a hike. Thanks for all who joined me and made this a fun day.” 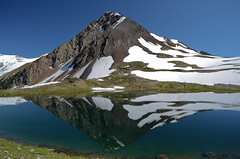 Su-Laine hiking the Musical Bumps via Singing Pass:
“Do this trip soon! Eight of us headed up the steady gradient of the Singing Pass trail on Saturday, towards the meadows where a variety of alpine flowers were in bloom and more had yet to open. Russet Lake had plenty of excellent camping spots. It got cold: we measured minus 2 degrees at night while we were still awake! On Sunday six of us day-hiked to various altitudes on Fissile Peak in glorious sunshine. It’s a tricky scramble and only one of us got to the top, but even a partial ascent gave excellent views.

After waiting out a spell of bad weather at the Russet Lake hut, we hiked out in temporarily less-bad weather along the Musical Bumps trail. I discovered that a scrambling helmet is fun to wear in a hailstorm – you hear the clatter of hail while keeping dry and cozy. The fog cleared and the sun came out occasionally, enough to appreciate the beauty of the region, which included black bears and gregarious marmots. The (free) gondola to the village was scheduled to run until the late evening that day, so it was past 7pm by the time we got to the Dubh Linn Gate pub for dinner. The gondola is scheduled to run until late a few more times this summer (Sept 3, 4, and 5), but call Whistler Guest Services (1-800-766-0449) to confirm.

Thanks to everyone for making this such a fun trip with great company.” 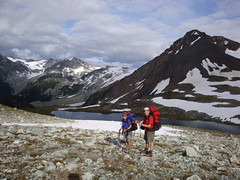 Jennifer exploring the area around Russet Lake:
“Peter, Laura, Sandi, Michael and Jen all got an alpine start to backpack in to Russet Lake for three days. Via the valley we made our way up Cowboy Pass and down to the lake to set up camp. After a second lunch, we headed up Fissile Peak. Fissile was challenging. There were lots of loose crumbly rocks covered with gravel and quite a long stretch requiring good handholds (of which there were none) giving us a run for our money. We did make it to the top, using the first route described in the Scrambles Guide. The group slipped-n-slid back down the way we came, with a few bruises and scrapes (that shale is full of fossils but also quite sharp!) but no major mishaps. I would recommend helmets for sure (easy to knock rocks down, and we had some narrow misses). Day two followed a crystal clear night of stars. Clouds and some sun made our scramble up Whirlwind peak and on to Overlord Mountain more dramatic. Scampering onto the ridge was the only challenging part of Whirlwind which was otherwise a lot of up with spectacular views of Garibaldi and the Tantalus Range. Now that we’ve done it, we would recommend climbing up the middle moraine to get to the ridge. From Whirlwind we took the northern ridge up Refuse Peak to Overlord. The panorama of peaks and ice-fields filled our eyes and took our breath away. With a couple of exposed areas requiring some careful hand and foot moves, the route up was straight-forward. Back the same way over Whirlwind to avoid glacier travel brought us safely (albeit hungry) back to Russet Lake. We woke up frost-covered in the morning but the sun soon warmed us up (it’s toque, long john, and down vest weather already). Third day was a mellow sunny meander over the Musical Bumps to the lovely gondola which whisked us back to our cars. Potluck dinners and lots of laughs made an unbelievable setting that much better – thanks for a great trip!”

Ahmad on the Musical Bumps:
“Everything is beautiful on Musical Bumps. The peaks, the glaciers, even the clouds look more beautiful there. The level of snow is much less this year. There are only snow patches and the biggest one was about 50 m in diameter. The trails were in good condition. The bridge over Harmony Creek doesn’t exist but there are logs. Slippery but not too much. The area before the bridge seemed it is frequented by bears. We saw a mother and its cub just before the trailhead. It might get confusing when you get over Harmony Ridge. Go along the ridge rather than crossing it prematurely. The grade will get gentle then. We got to Roundhouse at 7 pm and took the gondola down free. The whole trip took 9:30 in an easy pace.”