Steve v. at Gambier Lake:
“Gambier Lake is more like a full day trip including 2 ferries, waiting, and a hike. The trail itself is mostly road and seems longer than the stats might suggest. The lake is nondescript, probably not worth the effort compared to other common lower mainland lake hikes. If you do have a burning desire to see Gambier, I suggest Mt. Killam or if you want to see the lake specifically, go with interesting people that you can chat with to fill the monotony as I did.

I went with Tamara and Emeric (who are keen to join up for a Summer of mid-week trips!), and Kristy and Duncan visiting from Australia. Unfortunately Sherron missed the ferry, and most of the day was grey and drizzly (though the sun did poke out at the end). A few take-aways from our trip should you want to do a Gambier trip: 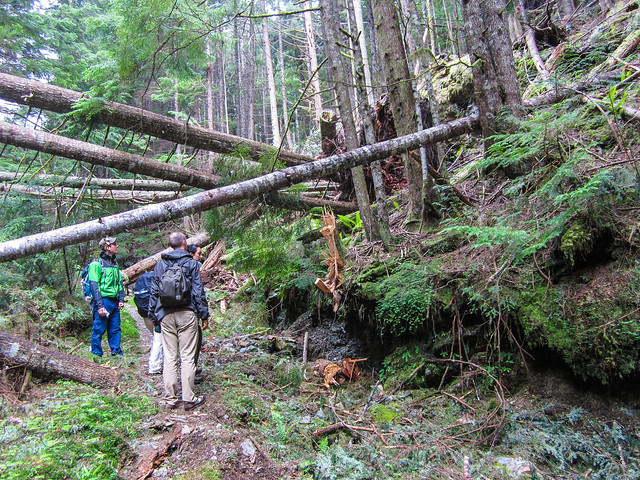 Steve on Mt Liddell Killam:
“After consulting with the Gambier Island Conservatory, we switched from our plan to hike Mt Liddell (overgrown and 2 bridges out), to the one favoured by the latest version of 103 Hikes, Mt. Killam. This trail was straightforward to find and the signage above average. The distinctive orange/silver pattern made us confident we were on the right track, and when no marker was in sight, there was plenty of trail tape. However, there was quite a bit of windfall and dry, dry, twigs to step over (no snow at all). The viewpoint was the best I’ve seen on Gambier, with views of Keats, Bowen, the Paisleys, and Langdale ferry terminal. A big thanks to a good, evenly-paced crew (5 in total) that got up super early to accommodate the ferry schedule (we hiked it in less time than expected). The weather was far better than expected as was the carrot cake from the Gambier General Store” 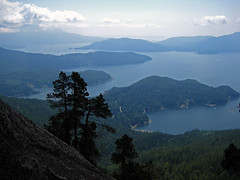 Su-Laine at Gambier Lake:
“I’m casting a dissenting vote amongst the accolades for Gambier Lake. This may be one for a hot day when you just want to be in the trees, as the trail is all through second-growth forest. There are no viewpoints and we saw little wildlife. I guess what makes this trip special is the ferries and the feeling of remoteness on Gambier Island. The trail was snow-free and dry except for big mud patches near the lake.”

Steve on Gambier Island:
“5 hikers, 2 ferries, great weather, but too much snow.

Who would have thought that hiking the pass between West Gambier’s two mountains would be so snow laden? I had called a local logger to get a feel for the conditions and felt it was maybe a foot deep at worst, but clearly had only gone ¾ of the way. At the ¾ mark the snow started to get very deep and once we hit the highest point (500 m) and started heading down to the lake the trail turned into a raging riverbed (which resulted in many super-soakers), covered with windfall and surrounded by massive snow banks. We climbed, slid, crawled and slipped, but our progress was slowed such that it wasn’t an option to continue, but since I’ve found we might have been within 1 km of the lake, but that would not have been a fun 1 km.

Regardless, this place has serious potential! Three hikes in one area, and I suspect when the snow clears that Gambier Lake will be much faster that the estimated 6 hours, especially for fit hikers (it’s not challenging, just long). Better yet, I suspect the snow was worse in the pass than on the peak trails. Mt. Killam looks like a must do, and should be open soon and was recently laid out in 103 Hikes 6th ed.”