Erez at Lake Lovely Water:
“Rob M., Rob D., Jo-Anne, Tia, Ben, Michele and I spent a great weekend in Lake Lovely Water. There are several ways to get across the Squamish River to the trail head. We used Jay Bicknell’s jet boat service and took a 20 minute jet boat ride which was a very nice way to start the hike. Jay also made sure our adrenaline level was sufficiently high for the hike as he made an almost 360 degree turn in place just before reaching the trailhead.

I’ve read a lot about the extreme steepness of the trail and so I was expecting a difficult hike up. I also knew that not too many people hike it, and so I wasn’t sure it would be marked well. In reality, I found the trail to be quite manageable. It is steep in parts, but there are steeper trails. In my opinion, it is similar in difficulty to the trail up to Garibaldi Lake, which is longer, but less steep. It was also marked very well, and had very little deadfall. We took our time, and hiked for about 4 hours to reach the lake.

The lake indeed lives up to its name and reputation of being the Lake Louise of the coast mountains. Near the lake there is an ACC hut which we were not going to use. We peeked in and found the hut to be extremely well equipped with a gas stove, table, kitchen with cupboards, and even mattresses for the bunk beds. The people staying in the hut were nice enough to let us use its boats (canoe, and row-boat). Instead of hiking to the sand spit where we intended to camp, we took the boats, loaded our bags, and spent 10 minutes canoeing and rowing to the campsite. The snow level was pretty much at the elevation of the lake so part of the beach was covered in snow, but it was so hot outside, that it was actually quite refreshing. We set up camp, and planned what to do next. Some of us wanted to chill-out in the camp site and go for a (very chill) swim in the lake, and the rest of us decided to explore the western end of the lake by boat. The lake is even more beautiful when seen from the middle. At the western end, there is a large nice waterfall, and two of us scrambled up it to reach the point know as the “Russian Army Camp” – a very nice alpine bowl at about 1400 m surrounded by steep mountain faces and glaciers. We hiked down, and rowed back to camp.

The next day our group split up again. A few of us woke up at 6 am to climb one of the surrounding Greek giants. Our goal was Mt. Pelops. We pretty much followed the scrambling route described in Matt Gunn’s book ascending from its eastern face. The route consists of climbing steep snow slopes and a bit of rock-climbing near the end. We did not use ropes; two of us had ice axes and one of us had crampons. I had neither, and even though it was not a hard route, I would not try it again without both. It took us about 3.5 hours to reach the summit at 2000 m. We had almost perfect weather and the views were glorious. We lingered for about an hour up there, had lunch, and descended. Our descent was much quicker as we slid down on the snow most of the way. It took us only an 1.5 hours to return to the campsite. The rest of our group who did not join us climbing Pelops woke up later and hiked up to Niobe meadows which is at the beginning of our scrambling route. All in all, this was an excellent trip with excellent company.” 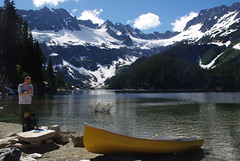