Steve on the Helm Creek cross-over:
“This was a manly trip. Five rugged men (Ben, Greg, John, Steve and Cam) with full packs dumped a car at Rubble Creek and then entered Garibaldi Park from the Cheakamus River end. We took snowshoes not being sure exactly what kind of conditions we’d be facing. We did really well on the ascent and as we lunched at the Helm Creek campsite we realized we were ahead of schedule and could afford to hike further before camping. There, as the sun beat down on us, I was convinced we wouldn’t need the snowshoes… but I was wrong. Another 200 m of gain and we hit the Cinder Flats completely covered by powdery snow. It was beautiful, and warm, ideal snowshoe conditions. We decided to go up Cinder Cone and take a look, the views of Black Tusk, Panorama Ridge etc. were great from there. Though we had prepared for “chilly” camping, some of us may have been a little under-prepared for a -15 C night on snow (at least I was). My feet have only just thawed as I type this. The exit via Garibaldi Lake (still snow free) was quite scenic as many of the leaves had turned. The Whisky Jacks were in full force and the photo weather of the lake itself as nice as I’ve ever seen it. A big thanks to Cam who shared his Winter camping tips with us!

For anyone planing a trip next weekend into Garibaldi, I’d say your window is closing. Any crossing like we did will be a winter trip for sure. Skis or snowshoes mandatory. And if you are planning going to the lake, I suspect ice and snow are coming soon.” 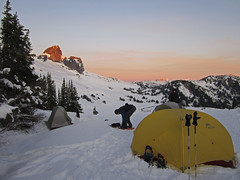