Evgeny on Mt Gardiner:
“When I made a callout I wanted it to be a long but regular scramble, however it appeared to be another megahike with mountaineering added to the mix. In total, it took 14 hours 30 minutes for the whole trip but it included more stops than we expected.

Knowing that we have to go beyond Pemberton and the days are short, I decided to start very early. So we left the parking lot at 4:30 am. Two of us were at the trailhead right after the sunrise and started hiking at 7:53 am.

There is a nice waterfall not far from the beginning of a trail but overall till it gets to the open, the hike through the forest was quite steep and uneventful. There was a tricky Place Creek crossing because the temperature outside was just above zero and most of the stones and deadwood we supposed to hop over were covered with ice. On the way up we crossed it without a problem. Right after the crossing the ground was frozen and covered with frost icing till the second crossing, which wasn’t a problem at all since the creek was very shallow and narrow there.

The forest opens up a bit when you come under the cliffs where we observed two magnificent frozen waterfalls. Though this area hasn’t been covered in snow yet. Just around the cliffs we came to the well known smooth slabs. I was worried a bit that they might be icy this time of the year but fortunately they were very dry, perfect for slab walking. Therefore my goal was to pass this point on the way back before the dark, so there will be no complications.

I was very optimistic about this trip as we reached the huts in 3 hours 30 minutes, that’s a quite good speed, and the weather was unbelievably good: clear skies, cool but not cold and no wind at all. The mountains covered with fresh snow provided awesome 360 degree views. After a short food break near the glaciology huts we started to traverse around the lake to follow the south east approach to the mountain. We aimed for the notch in the ridge. Snow on the slope was fresh and 40-50 cm deep and we could clearly feel the solid ground beneath that has no layers of ice on it. Going up over the snow covered talus and boulders were easier than I thought, the only difficulty was the depth of the snow. Irina took snowshoes with her and it helped her to make her life easier, but eventually we came to the steeper part and she had to pack them back because the fresh snow on the steep slope didn’t hold well for snowshoes. We were doing very well without crampons since the snow was dry and fluffy. As we came closer to the notch we ran into a problem.

The amount of snow was not enough to use it to go over the hidden slabs beneath and we couldn’t see where they end or have convenient cracks or breaks to cross them. So, we were probing the snow with poles and made several failed attempts to climb them until we found the place where the smooth part was small enough to dig out a handholds and push ourselves up on the top of the ledge, which led to the passable slope to the gully. I used a pole in one hand and SLR camera in the bag in another (Seriously! It works quite well as a hand snowshoe!) to help me going up the steep slope.

Then I made a mistake… going up was not slippery and despite the increasing slope angle I didn’t decide to put my crampons on in the gully. Initially it went quite well, though the slope was very steep, may be 60-70 degrees, the footing was very stable. But approximately on the 2/3 mark to the top of the notch the surface under our feet and a rather thin layer of fresh snow became a bit icy and impossible to kick in. Irina and I started to feel that it doesn’t hold us well anymore. I doubt that falling down would have killed us but considering the steep slope and some stones at the end, it would have been a very long tumble with a possibility of some injuries. And here comes a trick of a day: Irina noticed a stone that was barely poking out of the snow one metre to the left of us. We decided to try to use that stone to sit on it and put on our crampons. Yes, it felt pretty much like sitting almost half in the air. 🙂 Fortunately, it was flat enough on the top to sit on it but we still needed to keep good balance, especially when attaching them to our boots. We made it quite well but spent almost 40 minutes to do that. However, now we could ascent that slope further by hanging basically on the front teeth of our crampons kicked in in the very hard packed crust of snow. Next 20 metres of ascent took us 20 minutes more as we made our steps extremely carefully. Then the very top part of the gully was filled with the waist deep soft snow and, since I led our small team, I had to use my knee to dig the space a bit before I could kick-step my foot in. We safely reached the top of the gully at 3:35 pm.

The scramble out of the notch to the peak was enjoyable. Despite a bit of exposure in the notch it has good foot and handholds, the rest was a piece of cake. Right near the summit I had my epic fail situation when I stepped on the large loose rock and fell, while shooting my summitting video. But it was a flat area, so I ended up only with few bruises. At 4:18 pm we summitted. It was a scramble that turned into mountaineering but we made it!

Calm weather gave us an opportunity to enjoy the views and feel the warmth of the sun instead of just making the step on the top and rush back like happen to our previous hike this year. Since we didn’t want to use that steep gully to descend we were looking for other route on the other side of the mountain but it was steep and covered in snow. We decided that it would be too risky to go that way. From the top it seemed like if we would manage to climb to the other side of the notch then we might have an easy descent down. Therefore, after taking pictures and having food we went that way.

Except for the very short climb to the other side of the notch where we had to dig snow for hand holds the rest of the scramble down was quite easy. We could have saved more than an hour if we went this way up but I don’t know if we would consider down-climbing to the notch having snow on the handholds if we had chosen this route up.

The remaining part of the trip down to the lake was mostly smooth with just a few postholing in the process. We made a slight shortcut to save time as it was getting dark very quickly. We were on the top of the slabs part when it was after the sunset and just a few minutes of light left. As we successfully descended the slabs it became completely dark but the goal was accomplished. We turned our head lamps and proceeded to the car. Right after the frozen waterfalls we had a bit of a difficulty finding the way in the dark since it’s not marked enough for a night conditions but my GPS came to rescue in the difficult times. When I crossed Place Creek on the way back I slipped on the stone, had a refreshing dip into the creek, and got few more bruises. I used that stone on the way up but now it had an ice cover, invisible in the dark. The rest of the trip was without other accidents.

For the pictures and videos check https://www.livetrails.com/report/3838/0/Mount_Gardiner 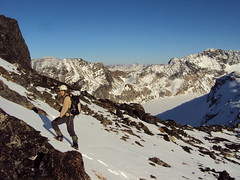