Brenda C. cycling Gabriola Island:
“My original plan was to do a solo cycle tour of Gabriola Island but decided to invite a few people along. In the end I did a solo cycle tour just as originally planned! I am not sure if it was the forecast of rain on Saturday or that it was only 2 days of a long weekend or that my trip included a Friday but nonetheless, I was happy to do the trip on my own.

I cycled from my home near Broadway and Granville and made it to Horseshoe Bay in 1.5 hours. I left extra early as I was not sure how long it would take me. The sun was rising and there were few cars on the road – it was a lovely ride. The 8:30 am ferry brought me to Nanaimo then then it was an easy cycle to Nanaimo Harbour terminal to catch the ferry to Gabriola. On the ferry I ran into the other Wanderung day cyclists who kindly offered that I could join them for the day. I knew I wanted to take my time checking out the island so I passed on the offer. I hope you guys had a great day! By 11:05 I was on the island and in less than 5 minutes I was at Descanso Regional Campground where I set up my tent and checked out the bay at low tide. Descanso is a very nice campground as far as car camping sites go. It is located in a nice forest area and, though there are no waterfront sites, it is a short walk to the water.

I spent most of Friday cycling along South Road stopping at beaches, checking out the petroglyphs near the United Church and the tide pools at Drumbeg Provincial Park. Gabriola is a nice island for cycling. There are constant rolling hills but overall, not too many steep climbs (South Road leaving the ferry terminal is probably the toughest climb). I had an early dinner at Silva Bay. I’d recommend the restaurant at the marina: a nice, large patio overlooking the marina; good food with vegetarian and gluten free options and cold beer! Oh, and there’s a liquor store next door if you should want to pick up a few bevvies for watching the sunset later. Just a suggestion! That evening as the sun set I checked out the rock formations at Malaspina Gallery and relaxed on a rocky point as sea lions swam by.

Saturday, after breakfast on the waterfront at Descanso Bay, I packed up camp (the friendly camp hosts allowed me to store my stuff at the office while I cycled the island for the day) then went to the Farmer’s Market. There were lots of edible goodies and talented artists. It’s a good spot to pick up a wedding gift! (Just sayin’…) The forecast for Saturday had been rain: wrong! As one of the other patrons of Mad Rona’s Coffee House said ‘there must be a sun pocket over Gabriola Island.’ It was another gorgeous day. I spent a few hours beachcombing at Sandwell Provincial Park. Over the 2 days I went to almost every beach on Gabriola, except for Whalebone Beach. Well, what did I find at Sandwell? Whalebones!!! Or maybe sea lion bones. Ribs, sternum, vertebrae and flipper bones. I called the visitors centre thinking that this was a unique find but when no one came rushing to see my discovery I realized that I am just a city slicker who should have been a marine biologist! That afternoon I caught the 3:15 ferry back to Nanaimo. It gave me plenty of time to walk along the promenade and enjoy an ice cream before heading to Departure Bay for the 5:20 pm ferry. Just as I boarded the ferry it started to rain. Thankfully, it cleared up by the time I reached Horseshoe Bay which allowed me cycle back home again as the sun set behind me. I was quite proud of myself for making this a fully self propelled trip – okay, I had some help from the ferries!

My recommendations:
– Use a BC Ferries Experience card to save on fares and bicycle charges (I saved over $10)
– Camping at Descanso Regional Park: less than 5 minutes to the ferry terminal
– Check out the Farmer’s Market: High quality artisans and yummy treats
– Great beginner to intermediate cycle trip: there are hills but it’s not too challenging.” 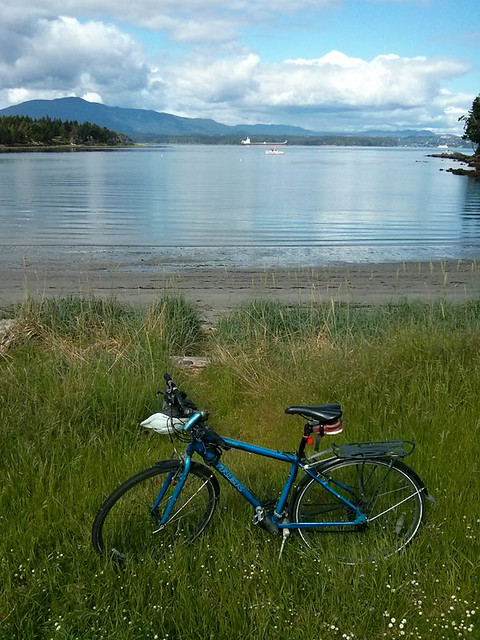