Tu Loan at the Meager Creek hot springs:
“With no news regarding the road conditions, we were uncertain as to how far we could get on the FSR (road after Pemberton Meadows) before hitting snow. A 4wd[1] vehicle was necessary to get up a steep hill at the 23 km marker. Clearance wasn’t too much of an issue, as you just have to avoid the larger size rocks on the road. (Beware that they are building a new road, so make sure you take the steep road going up on the left. If you see big machinery, don’t take that road!). We made it all the way to around 27 km before we were met with some snow (750 m elevation). We parked the cars and the 6 of us headed off to the hot springs with great anticipation!

The 3-km trek to the trailhead was uneventful except for the putting on and taking off of snowshoes. We thought that we could do without them, but the snow was soft and we sunk quite deep…deeper for shorter legged people like me! We would encounter a patch of snow, then a long stretch of gravel, before coming upon a long stretch of snow again. We surmised that after a few weeks, one would be able to drive straight to the trailhead. We were at the trailhead in 45 minutes.

According to our fearless leader, the trek to the hot springs was a mere 10 km[2] (!), 6 km of which were to be in the forest and the last 4 on a logging road. What we didn’t realize was how rugged the terrain would be and how the soft snow would hinder our speed. Time was also lost with the taking off and putting on of snowshoes. Our poor snowshoes sure took a beating! With spring conditions, exposed logs and rocks/boulders could not be avoided. The most challenging part of the trek was post holing through the snow in the clear cut sections. We were post holing because we dropped our snowshoes by the small boulder section of the trail, thinking that we no longer needed them. Wrong idea! Poor Bryan found himself chest deep in snow at one point. The best part of the trail was the amazing trail markings by the VOC. Thank you to those who were part of this project. It is very hard to get lost as orange markers were frequently placed and easy to spot.

After 7 hours, we arrived at the hot springs, tired but elated! This was my first visit and a long time waiting[3]! Because of the landslide from 2010, these springs can no longer be accessed by car. The campground had an eerie feeling of abandonment. We were just excited to have the whole place to ourselves! The main pool was well maintained and Fred fiddled with the hot and cold water pipes. Someone thoughtfully left a pond net for us to scoop out the algae. We don’t know when it was last visited, but the pool was mostly clear of algae. Kit noticed that the pool was heart shaped! What better way to end the evening than with an après dinner soak in the hot springs? It was just what our sore and tired bodies needed! Candles were lit for ambiance, and we had a lovely evening of adventure story telling… because that’s what a bunch of Wanderungers talk about on trips!

The trek back was a bit quicker and we were back at the car in 6 hours, with plenty of rest breaks. Again, the clear cut sections proved to be most challenging. BOO for clear cut! The only other heads up is mosquitoes! They made their presence on the trail and at the campsite. I figure they will be in full force after a few weeks. I came home with 10 bites!

Thank you Fred T. for organizing this trip! If not for the snow, the trip would definitely have made the 5 hour timeline. I am hoping to go back in the fall and avoid the mosquitoes. By then, I hope the trail will be well-trodden! 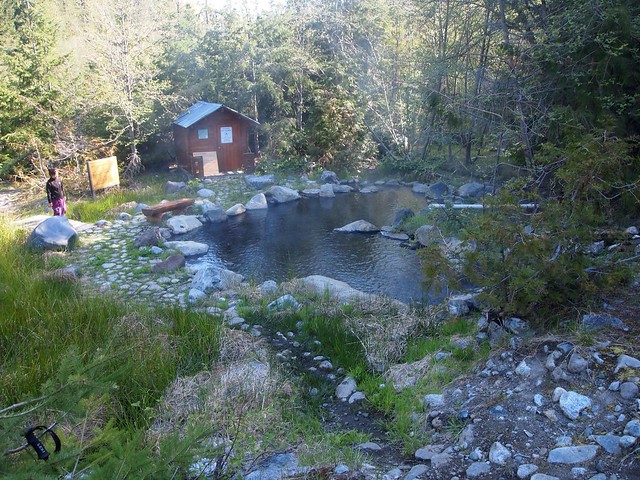