Rob M. on Mt Laughington:
“A late start (late TR as well) and following a “prospector” through a brief 4×4 adventure after the Foley Creek FSR, placed five of us into a parking lot filled with BCMC vehicles. The BCMC skiers went down the lower Airplane Creek road while we switchbacked in snowshoes to the upper road. We stopped every twenty minutes to chat up the tango line of peaks to the north – the usual suspects – Lady, Knight, Baby Munday, Stewart, Still and Welch. Dean was the only person amongst us having spent time on Munday and Stewart, but that’s not the reason why he was our designated canary on the snowbridges. The snow pack was heavy, soft and deep so it took us a couple of hours to cover 4 km. We caught up with the skiers’ tracks at this point and soon ran into all 12 BCMC skiers skinning up an elegant line to the peak. A considerable amount of BCMC/Wanderung shared DNA led to a long exchange and catching up leaving both groups a little short of their objectives. We ended up turning back at the sub-summit. It was a fairweather day here, but one of us had to be back in Vancouver by 5:30 pm where the rain was coming down in sheets.” 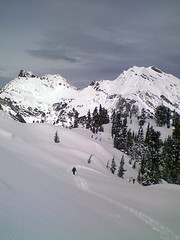