Eugene on Zoa Peak and at Adams River:
“Four of us traveled to Roderick Haig-Brown Provincial Park east of Kamloops in order to watch one of the largest Sockeye salmon runs in the world. The official festival has already ended, however, the spawning season was at its peak. The fish count follows a mysterious 4-year pattern and is dramatically higher this year.

As we were walking along the river, we had plenty of opportunities to have a closeup look at sockeye, as they were too busy struggling against the strong current in a desperate effort to reach their life-long goal. Portions of the river bank has accumulated a large amount of dead or dying fish. And yet, as we walked along those graveyards, we could easily spot the beginning of a new life with plenty of fish eggs lying around. Overall, it was a really dramatic experience watching the fish, as the sockeye offered us another perspective on life and death.

Another highlight of the trip was the spectacular Thompson valley and the city of Kamloops with its well-preserved historic downtown. This was a great place to escape from the never-ending Vancouver rain…

On the way to Kamloops, we did a short hike to Zoa Peak. Most of the trail was covered by fresh snow, which started at about the 2 km mark and became over 20 cm deep at the peak. However, there were still a few open rock sections in the middle part.

Route finding to Zoa Peak was a challenge, especially on the upper portion, where there were virtually no visible markers. We were mostly following the footprints of some small animals that appeared to follow roughly the same route.

Unfortunately, the main Zoa Peak was hidden in clouds, so that once we reached the fully forested minor peak, we decided to turn back. Nevertheless, as we were walking along, we had plenty of opportunities to enjoy the gorgeous views on the surrounding peaks and valleys.” 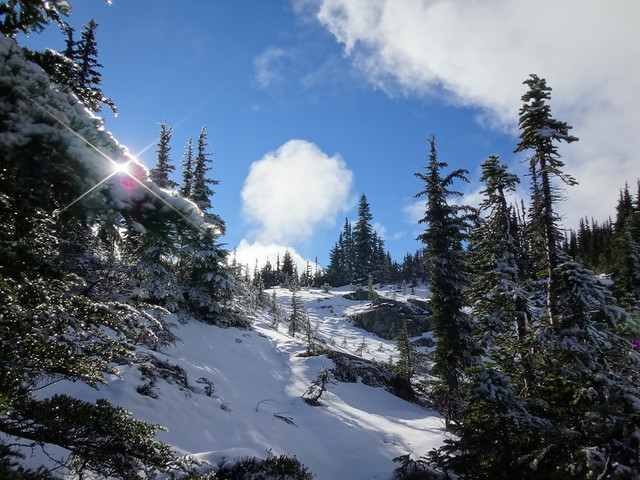