Rob M. at Little Diamond Head:
“Anyone who’s been to Elfin Lakes knows what a drudge it is vis a vis the Lions slogging road. Thinking of it as half way to Little Diamond Head was different. From the near empty Elfin Lakes Hut we headed high towards the South Columnar Peaks then traversed an easy gradient across the face of the peaks just below their avy runouts yet above the gulley traps. The Gargoyles’ saddle is roughly half-way to Little Diamond Head. From there it was 120 m of whahoooo glissading down the north side of the saddle – but knowing we had to make up for it in spades on the other side.

The views from the north side of the saddle were quite spectacular and I regret having left my camera behind, relying on my cellphone for all the pics. The temperature fell suddenly from banana daiquiri to super sized slushy. The snowpack developed a thick tile surface above the deep moist powder making the ascent arduous with a full pack. Having succumbed to the blue sky white snow syndrome we dug in our camp a little late in the evening at the base of Little Diamond Head. We each had different reasons for a fitful sleep – a gale force micro-system that rocked the Elfin Lakes cabin “all night long” a month ago kept me awake with weather paranoia.

Waking up with Mount Atwell at our doorstep took a while to digest. We ate less than a snack and then quickly summited Little Diamond Head taking in a jaw dropping 360 view. We soon also started up the west ridge of Mount Atwell. Straddling the cornice tops with a few hundred meter drop on either side wasn’t the worst of Atwell – it was knowing that the high temperature was weakening the snowpack under our feet. Next to us were two avy’s flowing down Atwell the size of Park Royal. A tree bomb had set off a size two plus avy off the Columnar peaks covering our earlier tracks. You could never get enough of this eye candy but we did return to our gear – packed up, filled in our camp site – 18 km back to the parking lot. The most difficult part of the hike was finding space in a pub. We caught the last period of the first US vs Canada game at the brewpub with a mixed audience – you know the rest.” 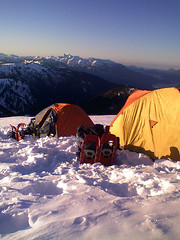