Pablo at High Falls Creek:
“First attempt Sea to Sky was closed. Second attempt nobody signed up. Third attempt six of us, following the instructions, we tried again. After the bridge at the power plant we founded a trail with the orange tape that matched the description. We started hiking up what seemed a trail for about 400 m waiting to find a chain after 30 min. We ended up scrambling on animal trails so we took a group decision to go down. We reached the cars around 2 pm and we had lunch. After that we decided to go further on the road and found the real trail. So it’s the second bridge after the power plant, not the first one. Fourth attempt. We decided to try again, the hike was as described in the book, steep, chains, close to the ridge, hard, but compared to our first attempt it seemed easy. We couldn’t find the logging road to go down, so at 5 pm we decided to go back from were we came up.” 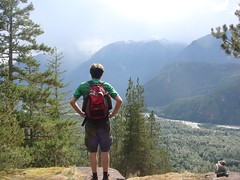