Peter A. on Williams Peak:
“Hurrian, Siegfried, Nikita, Alex, Lana, Carol, Dave, Thomas and I successfully climbed the relentlessly steep Williams Ridge in 30 degree heat, braving wasp stings and enjoying a bounty of huckleberries and blueberries. Approx 1000 m elevation gain straight up: like the Grind, but higher and without steps. After another hour of hiking along the beautiful, rolling forested ridge, we ascended “the first knoll” for lunch, which sits across a rocky basin from Williams Peak. The trail from the parking lot to this point was clearly marked and well-maintained. Beyond were various routes for ascending the peak.

After lunch, six of us set off to summit the classically-shaped summit horn: the heat and blisters took their toll on three of our party. We followed Gunn’s route, beginning by descending steeply a lot of vertical into the large basin below the mountain to avoid cliffs. From there it was a long, hot ascending traverse across a number of boulder fields and ridges to reach the base of “the ramp”. Though steep and dusty, the trail up the ramp was clear and contained few loose rocks, providing easy access up and over the south ridge of the peak. A short traverse dropped us into a large, prominent gully that led straight up to the summit. Take time to note where you enter the gulley so you can easily find your exit and route back to the south ridge on your descent. The gully is very steep, but mostly grassy with lots of foot-holds. Since it was hot and dry, it was just a long grunt up: I wouldn’t want to do this up or down when it’s wet and slippery. It took us 1.5 hours to summit from the first knoll.

Views on top were hazy but spectacular. The Peak is surprisingly broad, although the drop-offs are super steep. On our descent, on top of the south ridge, poised to start our way down the ramp, we found a series of cairns leading off to the right. We followed these, which took us on a gentler descending traverse, keeping us higher above the basin and many (but not all) of the boulder fields. Cairns led us just below the cliffs of the second knoll, until we intersected with our original route directly below the first knoll, but much higher above the basin. Our return to the first knoll via this route took a little over 1 hour.

The long, descent to the parking lot was happily broken up by sessions of berry picking and eating. Round trip time was approx. 9 hours. The hike was physically demanding (no water sources from the ridge onwards), but the scrambling was technically easy. A great group and an outstanding hike.” 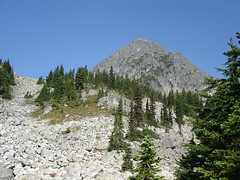