Su-Laine on the West Coast Trail:
“Yeah, we made it! Six days on the West Coast Trail went by quickly for our group, with one regret being that we didn’t make it a longer trip and visit the beaches of the south end. The southern 13 km of forest trail have no redeeming qualities whatsoever, and the next 9 km feel almost as pointless except for the satisfaction of having several dozen ladders and countless bottomless mud pits behind you. Despite improvements over the decades, this is still a tough trail. Good things to have are sturdy well-broken-in boots, tall gaiters, bicycle gloves, two poles each, and microspikes for slippery logs. You need balance and agility to get anywhere. After two long days trudging through the south end, the lovely beaches and faster hiking conditions of the north end were a joy. It’s a beautiful trail for gazing into tidepools, for swimming in creeks and waterfalls, and for exploring seaside rock formations.

As we’d hoped, the trail was comfortably uncrowded, and finding good camping spots and room in the metal bear boxes was no problem. The mice are definitely back, especially at Tsusiat Falls – don’t delay in getting your food to into the bear boxes in the evenings! One other thing to know is that Telus cell phones work on the trail but Fido ones apparently don’t.

We got to know our fellow south-to-north hikers a bit, enjoying their company at shared campfires and at a brilliant brunch at Tides and Trails restaurant on day six. Hiking times were very long on most days and there wasn’t much free time, but we took a break for burgers at Chez Monique and spent some unhurried time at the beach, and entertained ourselves by building a bridge across the Darling River. We managed to see some whale spouts but not much else in terms of rare wildlife. There was a sense that there is more to the trail than we could see that week, giving all three of us some desire to go back.

P.S. The Parks Canada staff said July and August are fully booked and that there are still some reservable dates in June. September is reportedly an excellent and uncrowded time to do the trail.” 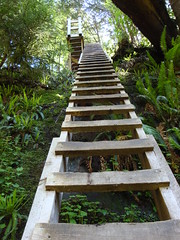