Chris N. in Tullameen Meadows:
“Colleen and Rob joined me for a trip into the Cascade Recreation Area this past weekend. The trailhead is just past Rhododendron Flats in Manning Park. We elected to take the Whatcom Trail on the way up and encountered our first bit of snow about 100 m below the pass to Punchbowl Lake. We crossed over the Punchbowl outflow stream on a snowbridge and then back again lower down on the mostly submerged log bridge. Snow covered 90% of the trail between the pass and Snass View Camp but the campsite was largely melted out and dry. Trailhead to Snass View at an ever moderating pace took 7 hours. An after-dinner ramble was called due to dark but we were quite close to the hidden lair of the secretive snow frogs. The night was mild and the next day dawned bright and blue. We hiked down to Tulameen horse camp encountering an interesting clear water spring on the way (future site of our spa and resort). The trail was about 80% snow near Snass View but almost all traces of snow were gone from the Tulameen area. Lots of deer and elk sign but no actual sightings (except for the elk-on-walrus episode). We returned by the Dewdney trail following moose prints. Early on, it was obvious that feet were not going to stay dry with the numerous creek crossings. In several places, the trail was under a foot of running water. Snow disappeared around where the creek goes underground. From that point to Dry Lake, there was copious bear scat and trails tramped down through the lush vegetation. Dry Lake wasn’t (in that it was full of super-clear eerily blue water). Light on-and-off sprinkles started at a stop in a cedar grove where we listened to distant thunder rumbling. We got back to the trailhead 4 hours after leaving Snass View. We stopped at the Wildcat Grill between Hope and Chilliwack where we enjoyed food and a spectacular thunderstorm on the patio (and stayed moderately dry in the process). Road closures for paving on the 1 just north of the Port Mann caused a backup starting at the south end of the bridge and probably delayed our arrival in Vancouver by about 45 minutes (apparently, these start around 9 pm every night and would affect any late returns from any hikes to the east).” 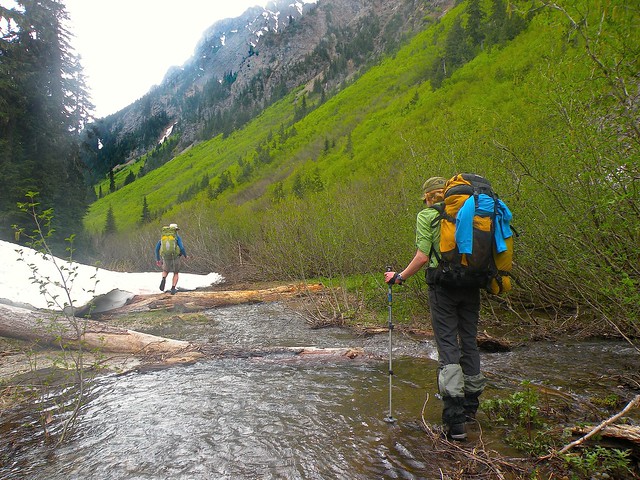