Andy G. at the Chief:
“Today’s hike celebrated ten years since I first hiked the Chief, almost to the day. Eddie joined me on a day when even the weather conditions closely matched those of a decade ago, if cloudier with the summits of the Sky Pilot group and Garibaldi shrouded in cloud all day.

The trail is dry and snow- and ice-free and was an absolute pleasure to hike today. It was also delightfully quiet, as we met only a small number of hikers. As we reached Second Peak, a lone hiker was practicing yoga on First Peak and had the space to themselves. It wasn’t long before their peace and quiet was disturbed by a dozen or so hikers and dogs.

So what’s changed in a decade? The trail has been upgraded and re-routed in a few places; the Sea-to-Sky gondola has been realized (which had just been proposed in its original Chief-topping form in 2005); the Woodfibre Mill has closed, improving the view; and the number of people attempting this hike has gone way up.

What hasn’t changed is that the views are awesome, the trail is steep (!), the chains and ladders are fun, the grouse are sounding their booming calls and the descent between Second and Third peaks is a mess of roots and rocks.

Salmonberry is out in full bloom but not much else. Watch out for the chipmunks – their begging and scrounging skills are second to none.” 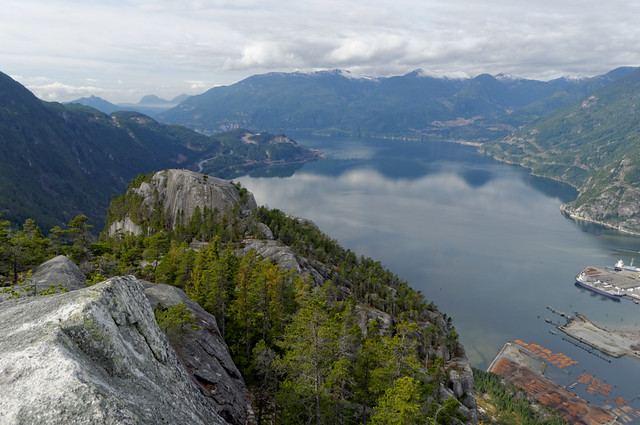