Ben at Semaphore Lakes:
“The time of year was near perfect for a trip to this area. While the lower portion of the trail was very muddy, the ground in the bowl containing the lakes was nicely frozen. There was a light blanket of snow varying from sparse patches in the sunny spots to several inches in the shade of the ridges. It was just enough to add beauty to the alpine scenes without making travel difficult. After establishing camp we made our way up Locomotive Mountain. We followed the gentle southern ridge which cannot be seen from the lakes. The route was mostly snow-covered talus and easy to follow. On the summit, the air was cold and clear, and the views were exceptional. Although the sun set well before we made it back to camp, the half moon was bright on the snow and we had no problems. After a very chilly night we were happy to see the sun crest over the ridge at around 10:00. On this day we went for a nice walk along the ridge to the east, and then meandered our way around the lakes and back to the trail. Thanks to Bill and Mazy for joining me and contributing to this great trip.” 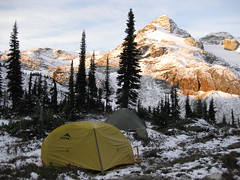