Evgeny on the Semaphore Lakes peaks circuit:
“When I made a call out, Vlad (one of my companions on this adventure) proposed to make an extra detour to bag also Handcar Mountain if the time would allow. So the plan was settled to climb Face Mountain, then proceed along the ridge to Faceless Mountain, then optionally to make a detour to Handcar Mountain, which is a bit on the side and about 1.4 km straight to the southwest of Faceless, and get back to the ridge between Faceless and Caboose Mountains, then continue to Caboose, Tender, and Locomotive Mountains before descending to the lakes and getting back to the car.

Due to the long driving to the place in the early morning, three of us started hiking at 8:13 am and reached Semaphore Lakes at 9:00 am. From the lakes we headed to Face Mountain crossing a creek in the process. Scrambling Face was fun and in the morning it was warm and sunny to provide some spectacular views on the Train Glacier and the Locomotive Mountain. Route finding is rather straight forward if you are following the book description or a guy who’s been there before. 🙂 At 11:45 we’ve gotten to the top of Face and enjoyed a food break with some amazing views of the surrounding area.

The weather deteriorated a bit and as we started scrambling along the ridge towards Faceless Mountain. It became really cold at some point and we had to put jackets on to prevent freezing. We left Faceless summit rather fast and two of us headed to Handcar Mountain and one stayed to rest on the ridge. Me and Vlad went initially over the ridge between Faceless and Handcar. It was a lot of scrambling but, at the end, we had to descent all the way down the valley. It was a scree fest. Vlad was blazing through it and I was lagging behind. Nevertheless, we summitted Handcar. The weather improved and the sun showed up once again. Vlad went ahead to provide Colin, who stayed on the ridge, company while I was catching up. Amazingly phones worked in the area and Colin managed to call me to ask what’s taking us so long.

After I finally ascended to the ridge and joined the group the remaining 3 peaks were easy with small elevation changes. We summitted Locomotive, the last summit of the group, at 6:20 pm. After a short break there we descended back to the lakes trying to use snow for fast boot-skiing and butt-sliding. We’ve got to the lakes right before the sunset. When it became very dark we already were withing 10 min hike from the car.

At 8:45 pm we were back at the parking spot. The hike itself took us about 12 hours 30 minutes from car to car.

A more detailed report and images can be found on Live Trails. 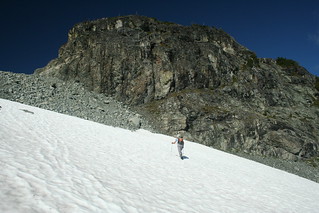