Sandra on the North Coast Trail:
“What an amazing week our group of 11 had on the 1-way 80 km trip through the newly opened North Coast trail and tried-and-true Cape Scott trail. We lucked out with only a few hours of light rain on 1 of our 7 days on the trail (4½ days on the NCT, 2½ days on Cape Scott, 2 travel days). There was lots of wildlife, with everything from bears and gray whales to a couple of porpoises playing around the front of our boat for 10 minutes during the water taxi ride on day 1 (and don’t get me started on the “whale-bear”).

Since we decided to hike the North Coast trail heading west, ending up on the Cape Scott trail, we did a 3 hour car shuffle at the end of day 0 to leave a couple vehicles in the Cape Scott parking lot (our end point). Our first day on the trail started with an hour-long water taxi ride from Port Hardy.

What was in store for us on the North Coast trail was apparent right away – straight off the rocks where the water taxi dropped us off, we had to haul ourselves up a steep embankment into the forest with the help of ropes. And – this was only the “moderate” section! The “very difficult” sections were great… ahh… for team building?!? Lots of muddy bluffs had to be scaled or descended with the use of ropes. The group did a fantastic job of yelling tips at people hanging from ropes on where to put their feet, passing backpacks along when sections were easier done as a pack-free scramble, hand-holding across sketchy sections, and of course taking pictures when people fell off the trail before helping them up (only after checking that it was just pride that was hurt, of course!).

I now have a new appreciation for the fact that a “minimal elevation gain” hike can be harder than summiting a peak! The NCT is a fantastic trail for anyone who wants to experience coastal hiking / loved the West Coast Trail, but wants a bit more challenge and no crowds. Kudos go to the folks that have punched this new trail through!!” 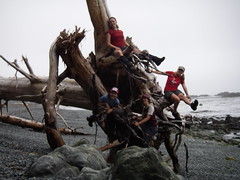