Ben on Mt Weart:
“I have had a recent urge to do something really challenging before the days begin to grow short and weather too uncertain. This trip to Mt. Weart delivered that challenge in full. The abundance of loose rock and lack of snow made this a demanding route. These difficulties were compounded by the sun toasting us at nearly 30 degrees. The route was composed of four distinct segments. The initial portion skirts right along the toe of the Wedgemount glacier and then climbs up the slope on the left side of a creek that is flowing down from a basin above. The route then crosses this basin along a second glacier and ascends a loose slope on the opposite side. It would have been great to see more snow here, but we made do by picking our way up through snow and scree. This slope tops out at another higher and smaller basin/bench where at last the base of the final ridge is in sight. The third part of the route, that is reportedly marked with cairns, is up through the cliffs to the lowest part of the ridge. If there were cairns in the cliffs, they were not obvious. We all picked slightly different lines up and found the top with no problems. There seemed to be plenty of ways to go that were only moderately exposed, but this section would prove to be a bit tricky on the way down. Upon gaining the ridge, we were rewarded with phenomenal views out across the immense Weart Glacier. From here we walked the ridge to the base of the summit and then scrambled our way up the final slope, which consisted mostly of large, semi-stable rocks. It was hard work in the heat of midday, but reaching the summit was a glorious moment and made it all worth while. We had views of…. pretty much everything. A big thanks to Peter, Beau, and Tim for joining me on this very memorable day!” 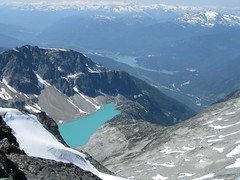