Bob H. on Mt Seymour:
“What a beautiful late winter day for a hike. On arrival to the parking lot (1,020 m), there were only a handful of cars at 9:00 am and not many other hikers were seen on the way up. Stopped to put on micro-spikes at 2 km into the hike at 1,230 m elevation due to increased hard snow and ice. Arrival at the first peak (1,395 m) was made in 1 hour and had a 15 minute break for photos. The snow was about 1 m thick here. Still not too many people seen. There were amazing views of Vancouver, Indian Arm and the Coast Mountains. Onward and upward to Mt. Seymour Peak. It gets technically more difficult here; although, not for seasoned hikers. Due to a few cm of fresh snow, it was apparent that two hikers were ahead. There is some class 3 scrambling here and some cliff walking, but it was all good. Made it to the summit (1,475 m) 30 minutes after leaving the first peak and lo and behold, there were the two other hikers. After having a conversation and taking more photos we all made the descent together starting at 11:00 am. On the descent, the crowds coming up were insane, especially below the first peak. Also, I couldn’t believe the number of people in runners up there! Anyways, we arrived down at 12:40 pm and was greeted with a very warm car! All in all, it was an absolute amazing day for a hike and the views were amazing. Will definitely go back!” 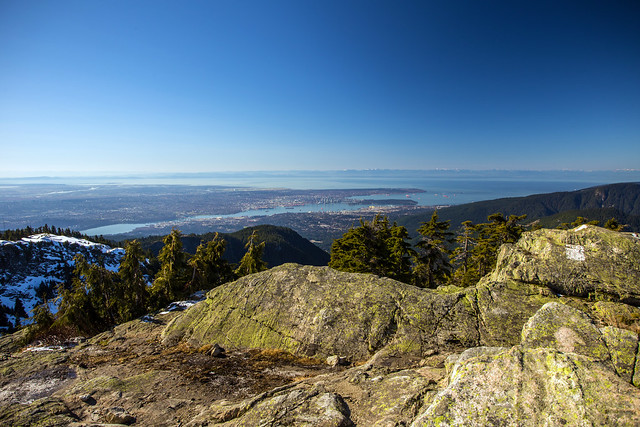