Rob M. on Mt harvey:
“It was a belated once-in-a-blue-moon hike – an overcast day with light precipitation expected around 4:30 pm. The freezing level was stuttering around 1200 m. Nine of us muscled our way up the logging road, shedding clothing along the way as the pace picked up. We managed to find the refrigerator sized trailhead of Harvey. Consensus was, we were glad to escape the logging road but concerned about the sudden and unrelenting increase in the gradient. All was forgotten when we came to the first lookout with clear midlevel views of the Howe Sound. The next piece of terrain drama was in that freezing level transition.

Some of us found purchase in offtrail snow while the rest of us bungled our way to a level where snowshoes were appropriate. There was some comfort in meeting the snowshoe hike description although around the tree burned ridge, there was 150m of elevation where the wind was acute in kind of an ugly way – enough to twist us about and make listening upwind difficult. Further along the ridge we took refuge and a break in a grove at the edge of the treeline. Gaining the first prominence along the ridge we looked up at Harvey and took a long gulp. The narrow ridge before us held 4 or 5 snowloaded steeplechase ridges and a summit that didn’t seem possible in 30 minutes.

I heard a voice rise up “let’s do it”. Unfettered by the 25lb monkeys on our backs we scrambled pell mell up the summit on our 4x4s. It was a race to the top as the ceiling was beginning to drop. Jiri, the first to summit had missed the 360 by a scant 15 minutes. We were able to tackle Harvey at an animated pace fuelled by a never ending stream of chocolates. Although standing on the small summit in a freezing jetstream wasn’t a compelling social environment, we were happy as clams. We did manage a toothy white on white on grey summit pic. The return hike was pretty much this TR played backwards. A light rain began to fall. It was 4:30 and we were back in Lions Bay. After a bit of exit finding we were in Horseshoe Bay for a celebratory hoist. I was impressed by the cultural diversity in the group and by how we all came together to make this hike successful.” 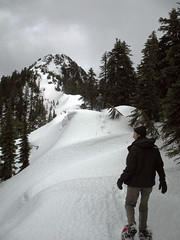