Jaime A. at Rainbow Lake:
“Eight of us woke up early and braved the frozen fog morning to head out to Rainbow Lake. The trailhead is found along a residential back road in Whistler just off Alta Rd, very accessible. The icy wind at the trailhead had us and our hands frozen in seconds, but we left it behind as soon as we ducked into the trees. Thanks to the full week of perfect, blue-bird days the trail was hard packed and manageable with boots or micro-spikes up until around 5.5 km, where the trail split into a fork, the left side headed to Madely and the right to Rainbow. The trail thinned out after that and the accidental post-holing increased.

The meadows before the lake were stunning with hoar frost that was bigger and more dramatic than any of us had ever seen. It was also the first bit of sun that we had encountered the entire way so it felt great on our frozen faces. We had a very quick lunch on the sunny lake and had to leave the sun behind to try and make it back to the cars before dark, which we did.

It took us 6.5 hours to do the 16 km snowshoe. Impressive for a group of 8 but it was too cold to stop for breaks! The trail markers were few and far between along here, mostly buried under the snow, but we had a packed trail to guide us. Route-finding here would be straight-forward, but trickier in fresh pow. The lack of sun along this trail puts it onto an overcast hiking list for me but it was a great snowshoe with lots of exploring potential beyond and around Rainbow Lake.”

Eugene Y. at Rainbow Lake:
“The winter trail to the Rainbow Lake is a scenic snowshoe route that gradually ascends through an old-growth forest to a sub-alpine country within the Whistler watershed.

Apparently, the route is somewhat underrated by snowshoers, as we haven’t met any other people on the trail besides a lone hiker coming back from Mount Sproatt. Thanks to the watershed regulation, the area is free from snowmobiles, although we did encounter a couple of vehicles passing by the lake.

Practically the whole trail is still covered by deep snow, except for the first 300 m where it gets a bit icy. The trail is well marked and easy to follow, except for a portion between the 2 km and 3 km marks.

Shortly before the 6 km mark, the trail enters an open area that offered a panoramic view to the surrounding peaks. The suspension bridge after the 6 km mark is removed for the winter, so that we had to cross the creek over a snow bridge about 100 m upstream. Finally, after a short but relatively steep ascent, we arrived to the picturesque Rainbow Lake area, which was still under several metres of snow.

Overall, we found this to be an excellent snowshoe route, on par with the one to the Elfin Lakes but more secluded and with a much easier access to the trailhead.”

Andy G. at Rainbow Lake:
“Perfect conditions for our group of 8 to hike up to Rainbow Lake. The trail is dry and in good condition, though the boardwalks require some care as there are many loose or missing planks. Bugs were much less of a nuisance than I expected, except at Hanging Lake where the mosquitoes were annoying enough for me to spray on some Deet. Woodland flowers are just past peak, but the peak for the marsh and meadow flowers is still a couple of weeks away. We extended this hike to Hanging Lake, which I didn’t really think about at the time, but later I realized it added an extra 4 km and 150 m elevation gain! With the warm temperatures and extra distance, two litres of water was not enough for me and I was glad of the still partly-frozen Nalgene back at the car.

Most of us cooled our feet (and more) in Hanging Lake where the water was pretty chilly (swimming is not permitted in Rainbow Lake). It took us 9 hours in total, a bit more than I expected but a good portion of that extra time was lounging around and cooling off at the lake. A great day out that started with a bear running across the road in front of us just past Squamish, ended with the ever-excellent burger and fries at Splitz Grill.” 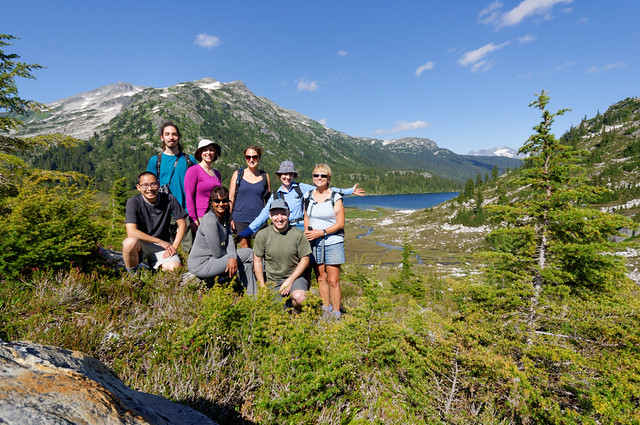 Su-Laine at Rainbow Lake:
“It’s a great hike and now is a great time of year to do it. The trail was completely snow-free, and dry for most of the way. This trail is known to be muddy in the springtime but it wasn’t an issue on this day. Some, but not all flowers were in bloom, so peak flower time should be soon. Group dynamics were another highlight of the day, with conversation ranging from world peace to Gary Coleman. Temperatures were surprisingly cool considering what a scorcher this week has been in Vancouver, and the trail wasn’t crowded at all.”