Stephen H. at Munro Lake:
“Elaine and Svetlana joined me for a very rainy but still satisfying hike in Pinecone Burke. We enjoyed no views and were a tad wet and cold by the time we reached Munro Lake. On a nicer day, it would have made a sweet lunch spot. We decided to save Dennett Lake for another day.”

Stephen H. at Sawblade Falls:
“This was a lovely rainy-day hike. Four waterfalls, foggy forest, and a huge stump. Matt, Mary, and Chris joined me for this loop involving the Coquitlam Lake View Trail and Woodland Walk. Signage was much better than I expected. Sawblade Falls is quite impressive – definitely worth a visit to Pinecone Burke Provincial Park.”

Chris M. on Burke Ridge:
“Sean was willing to check this area out with me. The weather was not great on Saturday so instead of enjoying a beautiful sunset we decided to build snow shelters. I started to build an igloo. We had brought a shovel and snow saw. Sean came over and helped. The aid was most appreciated! We then built a more blocky house for him. The morning weather was much nicer but we were both tired and headed back down in the morning. About 3 hours up and 2 hours down. We camped around 1100 m elevation. We took the logging road up and the snow started just after crossing the powerline construction. Only a handful of snowmobiles on Saturday but many more heading up Sunday morning.” 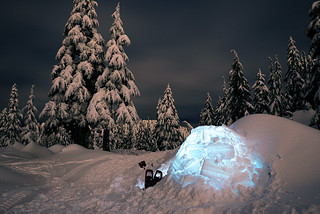 Carolyne on the Dennett Lake trail:
“Four early risers went to tackle Dennet Lake. After a steady climb we had a water break at Munro Lake and then pressed on. It soon became obvious that the trail hadn’t been cleared recently when we started having to go under, over and around many fallen trees. Dennett Lake was lovely when we stopped for lunch. On the map in ‘103 Hikes’, it shows a path to the west end of the lake and then two paths: one to take the ‘wet route’ down via the Village-Lake Trail, the other up to the ridge. We only saw one trail. After a steady climb we emerged about 30-45 minutes later at a junction for Harper Road. Not where we wanted to be. However, there was the consolation of the beauty of Hourglass Lake and making it almost to the summit of the ridge. We headed back to Dennett Lake. After some searching behind one of the campsites, the wet route was found. It went through a number of little water meadows. Eventually we arrived at the junction with the main trail. BEWARE: the trail map is not accurate for the wet route starting at Dennett Lake. Also worthwhile: Munro Lake lookout.”