Eugene Y. on Mt Macfarlane
“Three of us embarked on a trip to the beautiful alpine lakes at Mt Macfarlane. The trail was in a fairly good condition, although some portions were really steep and required some care. Hiking poles are strongly advised, especially when passing above the first lake. It took us about 4.5 hours to reach Upper Pierce Lake. As some of us felt really tired, we decided not to proceed further and took a long break at the beach. Some of us went to explore the area at the ridge right above the lake in order to catch views of the surrounding mountains: Crossover Peaks, Slesse Mountain, Illusion Peaks, Mt Rexford, etc. There was very little snow in the area, just patches here and there, however, the trail toward the peak has some steep scrambling sections and can be quite slippery.

On the way down we briefly stopped at the first lake and some of us took a swim. It took us about 2 hours to get from Lower Pierce Lake back to the parking lot.

Overall, this was a fairly demanding hike for a day. It would be interesting to revisit the area on an overnight trip in order to appreciate the true beauty of the lake in early morning hours.” 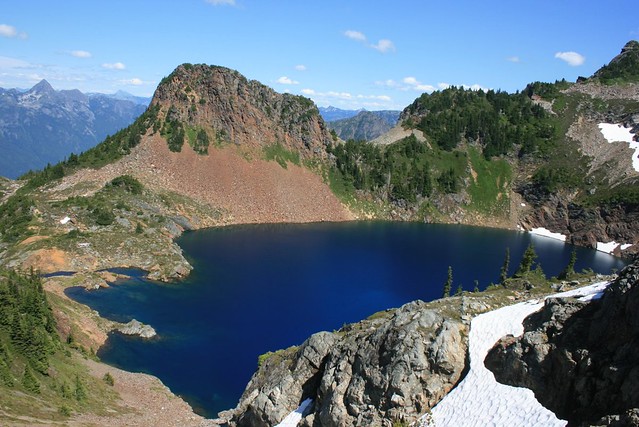 Jeremy on Mt MacFarlane:
“Four brave souls ventured out towards Chilliwack Saturday September 3rd to climb Mount MacFarlane. The drive took to the trail head took less than two hours, and was completely paved, except for the last 200 metres. Easy with 2WD. The parking lot was pretty full upon arrival, with both day hikers and overnighters parked there. 1770 metres is a lot to ascend, and the trail gets to the point and starts ascending within the first 150 metres or so of the hike. It took us three hours to get to the first lake, with few stops to rest. About one hour in, there is a sharp right turn in the trail – if you are looking down, it is easy to miss! It’s up and up and up, through lush forest, across one boulder field and crossing one creek. It’s definitely a slog. The trail was mostly dry, with a little bit of muddy sections near the lake.

After passing flasks around the fire for a while, we all slept well, tired from hiking, even though we had only hiked 3 hours. Sunday morning, it was just a one hour hike up to the second lake. The trail is steep in sections, but not difficult technically. It was great to hike without all our camping gear! The upper lake was still 70% frozen. It was another 45 minutes up the snow free ridge to the top of the mountain – this portion involved a tiny bit of scrambling but it was mostly hiking. At the top, the views were incredible. We could even see Mt. Rainier to the south. We hiked back down to the first lake quickly, ate lunch, packed up, swam, and headed back to the car. It’s even more of a slog down – it’s relentless down and down and down. Hiking poles definitely helped! On our way down, we passed some hikers coming up who warned us that 4 out of the 6 cars parked overnight had been broken into. Fortunately, we were one of the two cars that remained intact. The drive back was quick with no traffic. Epsom salts baths were in order to soothe sore legs from the descent.” 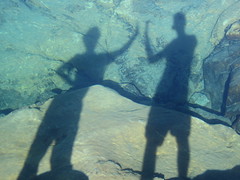 Peter on Mt Macfarlane:
“Lucy, Kevin, Luke, Pavel, Sebastian, Irina, Nikita, Katherine, Hurrian, Jeff and I had an outstanding trip summiting Mount Macfarlane on July 28. The morning drive to Chilliwack was not promising, as we went through fog and cloud. However, 5 km past Chilliwack, we emerged into sunny, clear skies that stayed with us the whole day. We set out on the trail shortly after 10am, and set a fast pace as we climbed steadily to Pierce Lake. The trail is well-marked, filled with switch backs, a boulder field, creek crossings and undulating forest. We emerged onto a steep clearing (created by avalanches), thick with bushes and wildflowers. 20 meters below was the large and enticing Pierce Lake, and cool views of the surrounding mountains and Mt Macfarlane. We pushed onwards, navigating some muddy sections through Pierce Meadows, and soon saw the spectacular falls running down the 100m headwall that creates the upper lake. The trail approaches the headwall by running up a cleft in a set of forested cliffs. Well-placed, sturdy ropes and strong roots help the hiker scale this section. We emerged from this cleft and faced a steep gully of loose small-medium sized boulders. Stay to the right of the boulder field and hike along the forested border. Flagging tape can be found intermittently on low-lying bushes. Near the top of the field, avoid the flagged trail that branches left and crosses the boulders (to Mount Pierce?). Stay on the flagged trail that veers right and climbs over a steep shoulder of the forest. We popped out onto a beautiful, slightly-inclined, heather-filled plateau just below the waterfall. The trail stays left of the waterfall, mounts the headwall and greets you with a beautiful alpine lake sitting high in the mountain cirque. The water is cobalt blue, aquamarine and crystal clear: like a tropical paradise. A few perfect camping spots to be had. After a short break, we pushed on up the well-marked, steep trail that follows a ridge to the top of Mt. Macfarlane (minimal exposure, but more difficult if conditions are wet). We reached the summit in 4.5 hours! Spectacular weather and views, and hard to leave. Retracing our steps, we spent more time at the upper lake, carefully descended the steep boulder field, and had an amazing swim in Pierce Lake led by Kevin and Lucy. The day was capped off with a celebratory ‘feeding and watering’ at a local pub. Fantastic hike and fantastic people!”

Ahmad at Pierce Lake (was Mt McGuire):
“The Borden Creek FSR was not accessible. After about 1 km into Borden Creek, there was a disassembled bridge. It looked as it was out for a long while. I had an alternative plan is to use the road that starts on the east of Slesse Creek which has a connection to Borden Creek FSR. That didn’t work either. The road was locked by a gate. Unfortunately the two 4×4 cars, which I thought we were extremely lucky to have, weren’t much of a help. We did Pierce Lake instead which is less than 3 km from where we were. The trail is in good condition except the bridge over Pierce Creek but it was not too hard to cross it. There was still snow on the last 150 m (it started at 1250 m) with a short hard section (but not too hard). No snowshoes were needed. The lake was still mostly frozen. Nice views to Macfarlane from the lake. Six of us did the hike in 7:20 hours. Thanks to Tim and Kelly who warned me that it might not be possible to access Borden Creek FSR”