Andy G. on Mt Strachan:
“A very peaceful and completely view-free hike on a cloudy day. A bit like the first time I called out this hike ten years ago! No matter – the beauty of the forest and the flowers kept our attention from start to finish. Emily, Janavie and I walked past Yew Lake to pick up the HSCT as far as Strachan Meadows, then Christmas Gully up to the north summit for lunch. From there we went over to the south summit to pick up the trail back down. We took the shortcut near the Hollyburn Giant to save a bit of time. It took us 5.5 hours car-to-car including nearly an hour for lunch.

The trail was snow-free and mostly mud-free, apart from the section between the Baden-Powell trail and the north-side turnoff to Hollyburn. Rocks and roots were slippery after the recent rain, and all the bushes were sopping wet. As were my shorts after a few minutes of hiking through all this…

Black flies were annoying once on Strachan summit and down through the marshy meadows, but mosquitoes were mostly not a problem – just a few here and there.

All in all, another great day out in the mountains!” 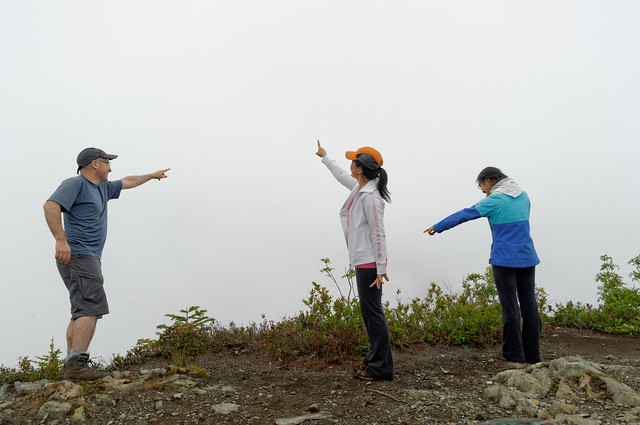 Stephen H. on Mt Strachan:
“Angela, Catherine, and I headed up to Cypress for a Friday hike of Mount Strachan. We went up the always-super-fun back side gully to the north and south peaks, and descended via the Old Strachan Trail. There were no other hikers on the route. Great views of the Lions and as far as Mount Garibaldi were had from the summit. We paid for them in bug bites.”

Michelle on Mt Strachan:
“Four drivers standing around with no hikers to drive. “No fair weather hikers please” means being prepared to hike rain or shine. Our group of 9 withered down to all the willing drivers, one of which still dutifully showed up to offer people a lift despite no longer being able to go on the hike last second due to unforeseen circumstances. A group of 4 of us took on the BP/Old Strachan Trail. Paul G’s trail report in the Wanderung archives proved to be the ticket to getting us there (indeed, don’t follow Dawn Hanna’s description use Paul’s, thanks Paul!). We decided to stop just short of the final summit approach as we came across a mama bear and cub who decided to go the way we needed to go, in poor visibility conditions (and it was also evident the view was not going to clear in time for lunch – the view would wait to appear until after we were sipping hot bevys in West Van). 😉 All in all, a good time had by those who went. But how many call outs for “drivers needed” this weekend (while 4 drivers were bailed on for this trip)? What a shame. Bailers, think twice about how taking a seat on a trip affects others – on your trip and potentially other people’s.”

Su-Laine on Mt Strachan:
“Strachan was a delightful place to spend one of those you-have-to-get-out-there beautiful fall days. We took the advice of a fellow Wanderunger and went counterclockwise, which had the benefit of putting the more-slippery part of the trail on the uphill. We encountered about 4 cm of snow about halfway up but besides the occasional slippery rock it wasn’t a problem to walk on. As a variation on the usual route, we had lunch on the non-crowded south summit, then hiked back to the saddle and up to the north summit to take a look, and then back to the south summit to continue our counterclockwise route. Then on the way back down we cut over to the ski run which saved some time. It worked out quite nicely, giving us lots of time to take in the magnificent views at the top and the blueberries on the way down.”