Eugene Y. at Watersprite Lake:
“Nine of us went to explore the new trail to the Watersprite Lake near Squamish. Mamquam FSR was in a decent shape, and our Subaru Outback and Forester quickly made it to the bridge across the Mamquam river (~13 km mark). However, the remaining 7 km along the Skookum Dam road were much more challenging. It would be most certainly unwise to attempt this trip in a smaller car.

The trail was fairly well marked and easy to follow. The first couple of hours we were mostly walking along some old logging roads through a large clear-cut area covered with shrubs and small trees. The route offered a good glimpse of the Garibaldi and Mamquam mountains through the clouds.

The trail became more challenging once we reached the boulder field. The last portion of the trail was fairly steep and involved quite a bit of scrambling. Overall, it took our group about 4 hours (8.5 km) to reach the lake from the upper parking lot.

The lake was truly mesmerizing. All those small islands amidst the soft turquoise waters appeared like in some children’s fairyland. The whole atmosphere was one of a dream and meditation.

Thank you for all the volunteers for building a trail to this little paradise!” 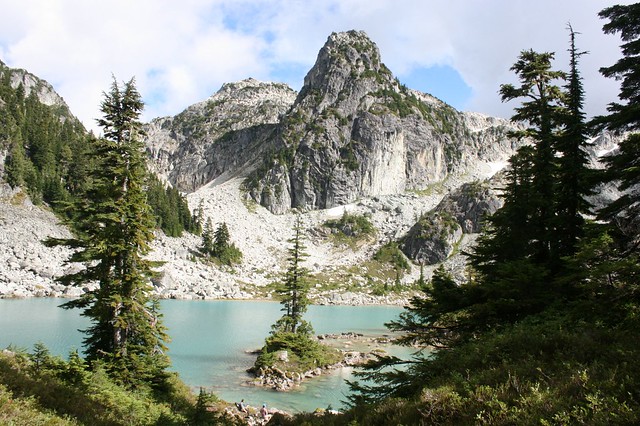 Danica at Watersprite Lake:
“Cheryl, Susan, Xiru, and myself embarked on a journey to Watersprite Lake. Various trip reports stated that the logging road was okay for 2wd vehicles, but I’m not entirely convinced. Our driver thought it was one of the rougher logging roads she had taken her car up. We made it to around the 15-km mark before bailing, and hiked the final ~1.7 km to the trailhead. We took the old trail, as could not find detailed instructions about the new trail. The hike follows an old logging road, before turning off to a swamp. Unfortunately we got chatting too much and missed the well marked turnoff. A quick backtrack and we were on our way. We had read reports of a muddy trail, and even in late August this was true. Hopefully the new trail will avoid the mud. The lake is reached after ascending a final boulder field, and the views do not disappoint! We spent 2 hrs swimming and lounging (mostly the latter), before heading back. A total of ~19 km and ~9 hrs made for a long but very worthwhile day. A huge thank you to Cheryl for driving!”

Chris N. on Alpen Mountain:
“The road up Alpen was a good lesson in the need for good maps. I had always relied upon the excellent 1:20000 maps that iMapBC creates but it turns out that, for the Alpen region, they were missing some recent and important side roads. It was better to use satellite images from Google Earth which showed all the major forks. Armed with maps of several varieties and altimeters, we managed to push our convoy of AWDs and a 4wd to a major fork at 1350 m elevation (about 7.5 km up the Alpen spur). The waterbars in the last 1.5 km caused some scraping for the lower clearance vehicles. A good 2wd driver should be able to make it to about 6 km assuming decent traction. It was a mild bushwhack east and then south towards Alpen. The final push was up a steep slope from the west. From here, we stuck to the ridge running south towards Split. We sidehilled for a bit around Split before again heading straight up the western slopes to the lumpy summit. We didn’t find much in the way of vents mentioned by others but a northern vantage of the peak shows large broken pinnacles as if some giant had taken an axe to the summit. We followed our track back over Alpen to the cars. The whole hike had taken just over 5 hours.”

Chris M. in the Pinecone Lake area:
“With the promise of hot sunny weather, 6 of us drove in from Squamish along the Mamquam FSR. Sadly, the snow was lingering lower down than I had hoped. This meant we had to hike 6 km instead of 3 km to the end of the logging road. We had lunch then carried on. The sun had been killing us so a shady break in the trees was most welcome. Never worried about finding a trail as you just need to stay in the centre of the ridge and head upwards. Just before we reached the top of Peak 5700 the day-trippers reached their turnaround time and headed back down. Well, Danielle and Tom did. Jack couldn’t bear to leave the views that were beginning to reveal themselves and he stayed with us.

Kicked steps up the last steep parts and Jack had made a wise choice – gorgeous views in every direction! We chose our camp spots and relaxed. Then we soaked in a stunning sunset and relaxed some more. Very little wind, warm temps & great company made this a wonderful night. Gary and Tu Loan had brought tents. I just slept on a pad looking up at the stars. (Having no overnight gear Jack had gone back down to sleep in my car – extra blanket & pillow there.) Waking up and seeing the surrounding mountains again was awesome. The walk back down was simple and just under 3 hours to my vehicle. Be warned, the road isn’t that rough but your car will get scratches towards the end.” 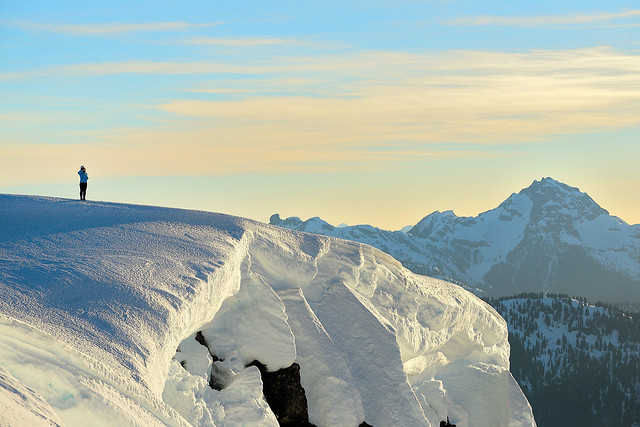 Irina on Mt Mulligan and Anif Peak:
“Following changes to the destination and the participants list, Brad, Melissa and Evgeny joined me for this hike. Brad’s Pathfinder taking us further than expected along the Mamquam FSR shortened the anticipated hike along the logging road by ~4 km each way. After hiking up clear cuts and rarely spaced trees, we found ourselves on the tree-studded Mount Mulligan. Dropped down to the saddle and continued up Anif Peak. The ascent was certainly steeper than I expected, but the snow was perfect for kick-stepping up, and while I was happy to be wearing my crampons, the others managed well without them. A walk along the narrow ridge, and we’re on the summit of Anif Peak. Now that felt like a worthwhile destination, with a close view of the Sky Pilot group and Mount Habrich under blue skies! We settled in on the snow-free south end of the peak and basked under the summer sun for 1.5 hours, enjoying the view and relaxing. It was a breeze getting down to the vehicle through the gully between Mulligan and Anif, leaving us with plenty of time for an enjoyable conversation and an early dinner at the Brew Pub. See full trip report with geotagged pictures on Live Trails.” 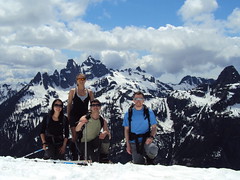