Steve on the Baden-Powell Trail between Deep Cove and Lynn Canyon:
“With one participant out sick and a no-show behind us the cross-over went off without a hitch. Two cars starting at opposite ends of this trail was an interesting twist on this fine day. The team coming from Deep Cove had few crowds at Grey Rock in the morning and a smooth journey the whole way, with even time for a swim. My team, coming from Lynn Canyon, had a 60 person club behind us (Vancouver’s Korean hikers), which we quickly outpaced.

The meeting in the middle was joyous as the nature-loving, quiet team (mine), and the “wild and crazy” team for the cove merged near the Samaritan trail. Lunch was short-lived as we had to get ahead of the 60 person pack again, only to find that the trail from Deep Cove to Grey Rock was teeming with dogs, smokers, and Lululemon gear. I’ve never seen so many people on that rock.

For me this was the first time starting at that end, and I found it easier to navigate some of the troublespots, but no easier on the ups and down (I thought it would be more downhill- and hike times were about equal). I think I prefer the “traditional” direction better.

We wrapped up with a snack at Honey’s doughnuts.”

Steve on the B-P trail between Deep Cove and Lynn Canyon:
“What a pleasant surprise! After a sunny Saturday I was wondering if I had picked the wrong day, but as it turned out, the entire weekend was great. A full load of 8 did the one-way trip starting at the east end. What shocked me was how it really was not all that muddy. We were prepared for it, but the gaiters and poles simply were not needed. Also, we may have taken a grand total of 25 steps on snow and the streams were not as high as I had expected (I wonder if this might be cause for concern in the Summer months).

Regardless, hike season without snowshoes is definitely here for those willing to stay at low elevation. This trail was chosen because it offers rain protection even on the worst days, so if you have a nice forecast, I’d suggest leaving this one for the next time it’s “iffy”.

We put up a reasonable pace with this group and had a good time meeting new people. The downside was all of the calories that we burned over 4.5 hours were replenished by ½ a donut at “Honey’s” in Deep Cove.” 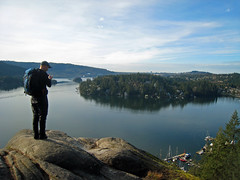 Merewyn in Lynn Canyon and down by the Seymour River:
“Well, the forecast for this day was a little off. We got sprinkled on a little on the trail but we also got a period of cloudy sunshine as well. The group had a very pleasant time exploring the Lynn Canyon and Seymour Demonstration areas. We all had a bit of a scare watching from a bridge above the canyon as a kayaker got caught on some rocks, struggled to regain control, submerged himself face-first in the water, and finally had to roll out of his boat and swim down through the rough patch to re-join his boat and his friends at the other end. But he got through okay and so we continued on our loop back to the suspension bridge where we had started.”