Andrew W. at Lindsay Lake:
“Spring has sprung early and trails normally covered by a huge dump of snow are bare and ready for hiking. A small group of two hiked to Lindsay Lake (near Buntzen Lake) for the ~13 km and 1 km of vertical. A tiny bit of snow at higher elevations in the shade but the view of Vancouver was spectacular! No bugs due to the early season conditions was just the icing on the cake for this great local hike!” 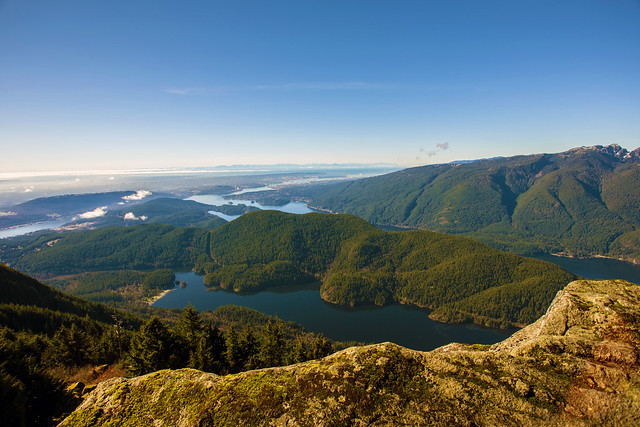 Alain at Lindsay Lake:
“On Sunday October 11th, I was joined by Allan, Chad, Cindy, Debra, Lyndon, Rob, and Robin on this very rewarding hike. We left the trailhead at Buntzen Lake just before 10:00 am. The trail ascended at a moderately steep pitch for the next couple hours before we came to a plateau upon which we passed by several small lakes, one of which had a thin sheet of ice covering it. We continued upon the plateau for approximately one hour before reaching Lindsay Lake which was very pretty and our lunch stop. We decided to make the ascent to Tangled Summit (Mount Beautiful) rather than complete the Lindsay Lake loop. The trail between Lindsay Lake and Tangled Summit does lose a fair bit of altitude before making a final steep ascent to the summit. We had been worried that we somehow ended up on the wrong trail and were headed down the mountain, but alas we were on the right path and approximately an hour and a half after leaving Lindsay Lake, we made the summit. We could not have been better rewarded with the spectacular panoramic view in clear sunny skies. We could easily see downtown Vancouver and further west to the Island, Indian Arm and across it to Deep Cove, and to the east, Coquitlam Lake just below, and further to Mount Baker. It was difficult to pry ourselves from our sunny perch, but finally we began to descend using the Swan Falls trail. While a much steeper trail than the one we ascended with, it still took about 2 1/2 hours for most of our group to reach the base of the trail at the far (North) end of Buntzen Lake which still left a 4.5 km hike along a service road to our cars. As both darkness and the closing time of the park gate were nearly upon us, one member of the group was forced to run the entire length of the 4.5 km service road in just half an hours time (with sore tired legs I might add) to flag down a BC Hydro Park attendant who agreed to pick up 6 members of our group who were at various sections of the service road, and they then enjoyed a relaxing ride back to the parking lot in the back of a pickup truck. Notwithstanding the little crisis near the end of the hike, all in all there was great satisfaction all around. Recommend allowing 10 hours if combining the Tangled Summit and Lindsay Lake hikes as we did.”

Robert on the Lindsay Lake trail:
“Our ambitious group of 12 hikers was successful in hiking the trail to Lindsay Lake and Eagle Peak. All the weather forecasts pointed to a sunny day, however we were in the clouds most of the day which provided its navigating challenges. We started the trail from the Buntzen Lake parking lot at 8:30 am and took the route up along Buntzen Creek to El Paso Junction, 100% snow free. From there you have a choice to take the right trail through various lakes or take the left trail to Lindsay Lake. We took the left. About halfway on this trail we hit some snow, which was easy to walk on and finally reached Lindsay lake, about 3.5 hours after our start. Even though it wasn’t sunny, there was a certain atmosphere of being in the clouds and only being able to see a few metres in front. From Lindsay Lake, we took the only route to Triangulation Point and then on to Eagle Peak. It was also here that we met a hiker from Moscow who was lost so we added another member to our group and will soon recruit a new Wanderung member. I would only recommend doing this trail when the weather is clear because in the clouds it was difficult to see the markers since visibility was extremely limited. When we arrived at Eagle Peak we decided to take the Swan Falls trail to the bottom. This trail warns of being steep and obstructed but it actually isn’t bad at all and you come out of the snow very quickly because you lose elevation so quickly. A walk back for half the group along Lake trail and Powerhouse Road for the other half made the end to a long day! Thank you for all your teamwork and eagle eye (no pun intended) scouting for markers.”

Hurrian P. at Lindsay Lake:
"Like most great trips, this one didn’t really go as planned, but the day’s adventure made it worthwhile. As we started to ascend up from Buntzen Lake I doubted that we needed snowshoes but by the time we got to the ridge there was 8 feet of snow. We followed the tracks of some errant snowshoers and somehow wandered off the regular trail to some place to the east of Eagle Peak. Luckily we bumped into a mysterious older man named Bob who looked like he had stopped aging a decade or so back. He confirmed that we were nowhere near the Lindsay Lake trail. (All of the signposts were buried.) He said we could find the proper trail again but we’d have to bushwhack through the forest among very deep tree wells to get there. He led us past Cypress Lake and to a great lookout over the eastern Lower Mainland before depositing us back at the proper trail. I think the trip demonstrated the need to also bring a topographical map because 103 Hikes, however good, does not provide sufficiently detailed maps."