Stephen H. on Orcas Island:
“Three glorious days in the San Juan Islands. Rasham, Ino, and Anna joined me on this no-reservations car camping trip south of the border. Day 1: Hiking to Turtlehead rewarded us with stunning views of the Salish Sea. Day 2: A grand loop up and down Mounts Constitution and Pickett granted us more spectacular views, forest walking, and a visit to a stone tower on the former summit. Day 3: We did a short walk to Cascade Falls before hitting the ferry back to Anacortes. All of these hikes are highly recommended. Our original plan was to camp at Mountain Lake. It was full, so we took a spot at the Midway campground by Cascade Lake, which had flush toilets. One trip highlight: seeing the broken soda fountain overflow with root beer on the ferry over. Another: a barred owl hung out with us at camp for a bit. Also: all the pop music we listened to all weekend.”

Heather in Manning Park:
“Seven enthusiastic people set out on Friday afternoon, bound for a weekend in Manning Park. We all rode up in Chris’s amazing transformer van – everything from hot water to cook stoves to coolers to a bed was in there (although passengers slept in tents.) We camped just east of Manning Park, in a free and beautiful spot on the edge of the Similkameen River. Saturday had one person off fishing for the day, one person solo canoeing, and five of us heading up Skyline trail to Snow Camp mountain, in beautiful sunshine and completely blue skies. We had a few bizarre encounters with zombie-like people that were doing an ultra-marathon (100 km or 100 miles, depending on who you talked to!), including helping one woman down the trail to meet up with her companions. These people had run and walked for 30 hours or so, across the mountains and all night long, and we all agreed that it was pretty sad to see them so zoned out in such a beautiful environment. The vistas opened up to stunning alpine meadows, dramatic drops way down to the lakes, beautiful distant mountains, and an incredible variety of wildflowers. We took a total of 6.5 hours to hike this trail – hot but very rewarding, and the swim in Lightning Lake after was very refreshing. That evening five people drove back to the lake for a full-moon paddle, while two of us slept well! Sunday involved a lazy morning, and then canoeing and swimming in Lightning Lake again – enjoying the refreshing water and relaxing atmosphere. The evening was topped off by a good supper at the Manning Park Pub, and then a drive back to Vancouver in the evening sun. And enjoyable weekend had by all… Thanks to Chris for organizing, driving, and supplying the amazing extra equipment and comfort of the van.” 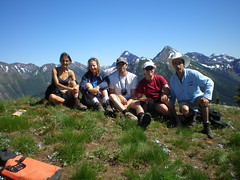 Christian at Roberts Creek and Porpoise Bay Park on the sunshine coast:
“A group of 4 adventurers arrived in Roberts Creek after dark. The roads were very dark and the signs were hard to read. Yet we still found the co-housing commons building on Emery Road. We attended the tail end of a show with the Tetrahedron Outdoor Club. The club members in general were much older and more guarded than we expected. Recreation areas in Tetrahedron Park seem to be a secret, closely guarded from the ears and eyes of us “Townsies”. John, from Surrey, was the social adventurer who started a conversation with smiling Marge. An ever smiling and wise old lady with a fantastic humour. She was very helpful in giving us directions and introduced us to a few club members. After informing others of our intentions, the worry-some looks on club member faces encouraged us to come up with a plan “B”. The road up to Mt Richardson is about as daring as the access road to Tetrahedron Park. There are a few ditches to cross that really require the use of a 4WD. Though, most of the roads are clear of snow this January, the roads are in the transition zone of freezing and are icy. A talkative man named Steve, surprisingly younger than us, gave us tons of advice and even drew up directions. He said going to Tetrahedron requires the use of crampons to walk through the transition area, and then thereafter with snow shoes – glorious powdered snow awaits. A shame that our upcoming Cypress 2010 Olympic events were not held there. 😛
Late in the night, we ventured for a nearby camping spot. We guerrilla camped at Roberts Creek picnic grounds. It was lightly raining all night, and we made good use of three tarps. With the two tents, we stayed really dry and slept well past sunrise. The ocean, the birds, the rain drops and the waves were relaxing for all of us. In the morning, the occasional dog walker made for some interesting doggie entertainment. We were paired up, so we got up at different times. As pairs, we walked along the stone & gravel beach for quite a ways. The stone beaches were quite pleasant and relaxing. Every community member we encountered was friendly and talkative. What a place to live! We returned, we packed up, and we made tea. With everything back in the car, we went to a Roberts Creek cafe – the Gem Top.

At the Gem, we had hot choco, cappuccino, cinnamon buns and gluten free treats. By half past noon, we left the cafe in search of easy walking trails on the logging roads nearby. Following the directions provided by Steve’s hand drawn map was a challenge. We encountered active logging on our preferred road on Saturday, so we turned back and took some other turns. We took a side road and passed what some could call a hippie camp. There from the car, we saw a large green camperized school bus, a teepee and a large yurt built upon on a giant wood deck.

A short drive up further, we stopped at a trail heading up into the bush – between the clear cuts. We followed the trail for 15 minutes until it grew over with dead-fall and disappeared. Instead of turning back, we followed an idyllic stream marked with surveyors tape for another hour. The stream seemed to be marked with tape to help maintain a buffer zone for the loggers. It was an interesting hike along the stream, around trees, deadfall, giant stumps and around natural obstacles. When we came out, we discovered we were hiking up a stream that belonged to the fabled long tailed frog.

By late afternoon, a few were still eager for more hiking and exploration, so we headed over to Porpoise Bay campsite. It was quite a large campsite with many large group shelters. We stopped at the sandy beach and had an early dinner of roast beef and Tsatziki on a picnic table. Post dinner we walked along the trail to Anglers creek and heard a few animals drop or jump into into the fresh water creek as we approached. We envisioned returning to Porpoise Bay in the summer for glorious swimming at the sandy salt water beach and for other play in the calm & deep fresh waters of Anglers Creek. We were tempted to jump in right there into the crystal waters of the creek, yet we held off and returned to Vancouver happy and dry.”