Chris N. at Tricouni Meadows East:
“Well, we didn’t end up finding the old trail down. It turns out there is a lot more recent logging on the south and east flanks of Tricouni. All the maps we had (OpenStreetMap, iMapBC, and Google satellite view) were out-of-date. Very little forest remains in the overlapping clearcuts. We parked one car just past the 4-km marker on Roe Creek and drove Chance Creek as far as we could. The directions on Club Tread seem pretty accurate but I think we missed the 8.1-km fork. For the most part, follow the arrows painted on the ground except at 8.4 km where the arrows point left but you should go straight on a more over-grown road. 2WD should park here unless you are confident in your driving skills (the next 300 m are rougher). AWD can make it to a fork at 8.7 km. Beyond is serious 4WD territory.

In our explorations, we did find an older, fainter route through the meadows which was nicer than the current trail and would work as a loop with the current trail. To find the older route, head right up a decommissioned road at the last switchback on the Roe Creek road. About 15 m along, there is a faint trail on your left (looks almost like a shallow gully). This trail leads up through the clearcut and enters the forest next to a small stream. You quickly emerge into meadows and the trail fades near a small marsh. Head left-ish to pick it up again. The trail is mostly flat and heads west through open meadows with wet patches before heading up a rocky gully that ends at a small lake just to the east of and slightly higher than the bigger High Falls Lake. To find the newer trail, head to the southern end of High Falls Lake. This trail emerges at the top of Roe Creek road about 200 m past the driveable portion and above the switchback mentioned previously. The blueberries were plentiful and delicious. The local bears thought so, too!”

Stacey A. at Marriott Meadows:
“A long-weekend two-night trip to Marriott Meadows and Rohr Lake. Four of us made the trip and were fortunate to have a driver with 4WD 🙂 It’s a short access road to the trail head if you have to walk though. Lots of bugs the whole time: mosquitos, black flies, deer flies, you name it, they were biting us. I would suggest bringing bug hats at the least (or waiting until later in the season). One of our crew had a small over-bed mosquito net that pretty much saved us as we could eat under it, etc. That being said, my skin was mostly covered, I used almost an entire small bottle of Ben’s 30% deet spray, and I still managed to get almost 100 bites! The others seemed to have fared a bit better.

First night was spent at Rohr Lake. The trail to Rohr Lake is muddy in several spots. The last steep hill up to the lake is definitely muddy and slippery and requires care! Alternatively, you can head up the boulder field next to the path with ease. There seem to be about 6 spots for camping at the lake. No toilet or cache, and the trees aren’t ideal for hanging food. Lake is cold but swimmable! The hike to Mt. Rohr takes about 2 more hours from the lake. It’s mostly boulder fields, but well cairned for the way.

Second night was spent at the lake just below the Wendy Thompson Hut (we heard the hut was overfull with a large group of 22, plus others). Again the hike was muddy with a few creek crossings on logs. The terrain was varied with forest paths, meadows, and boulder fields. No apparent obvious camp spots on the lake, just put up our tents on a dry patch of grass. Lots of hikes from here to explore. The lake was cold but refreshing and great for swimming!

All around beautiful views for both areas!”

Chris N. on Waterfalls Plateau:
“The lack of 4wds on Wanderung showed as I couldn’t scare up another driver and the ensuing logistical complications meant that only 2 of us left Vancouver at 7 am on our way to adventure and discovery. The Hurley was pretty awful – really in need of a grading. There was a huge pack of cars at the Semaphore Lakes trailhead as we passed – almost as many as you see at the Keith’s Hut parking area. The first 7 km of the Hope Creek FSR were in pretty good condition with some minor rutting left over from a recent wet spell. The east branch was definitely 4wd with frequent short but sharp waterbars needing good clearance and a 1 km stretch of close alder. We parked at the Beaujolais / Mystery scrambling parking area. The bushwhacking was moderate and short and we would encounter the odd flagging but didn’t find any specific trail except animal routes. Most of the route to Noel Pass was in narrow, heathery meadows. A tarn at the pass yielded almost-frog tadpoles, a newt and a multitude of water boatman bugs. We also encountered signs of winter sled traffic – shredded beer cans. We side-hilled into Noel encountering much krummholz and steep forest. Climbing the first side valley on the west brought us onto the rocky plateau that I had hoped would be more vegetated. But we found good camping spots near a tarn that was still melting out. On the middle day, we rambled west and found even better camping spots as we went and plentiful tarns. We interrupted a ptarmigan party, watched raptors hunt and eavesdropped on pika conversations. At one point, we spotted what may have been a wolverine! Returning to the car on the Monday, we descended due south through meadows and an old burn encountering some old flagging tape on the way back to the road. Along the way, we swashbuckled moptops and discussed the prevalence of walrus-mounted alpine mammals.” 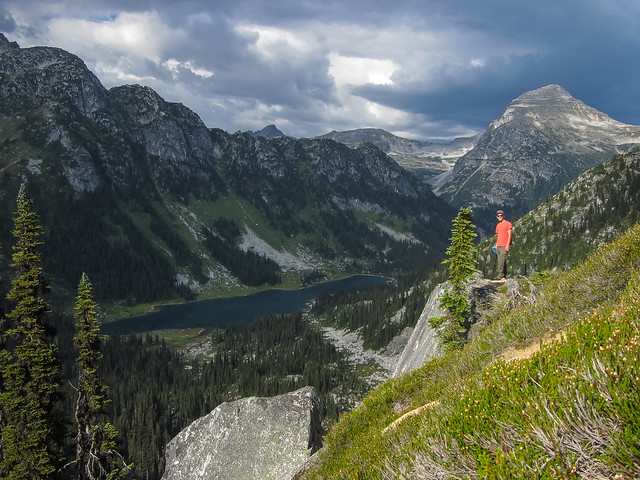