Paula at Lindeman and Greendrop Lakes:
“There is now a road sign on Chilliwack Lake Road to indicate the location of the trail. The first part of the trail is well marked and we found the steady climb to Lindeman Lake relatively easy, after enjoying a snack and photographing the extraordinary colour of the lake we continued on the trail to Greendrop. We encountered some snow and ice patches making the rock slides more treacherous to cross. About 40 mins from Greendrop, deep in the valley, we found ourselves in deep snow. All the group had worn waterproof hiking boots so we decided to proceed to Greendrop. It was quite a challenge to cross the fast flowing creeks, with snow bridges melting fast – a few ended up with feet plunged into the creek (right through the snow bridge) and another group member took a cold bath! We soldiered on to Greendrop which was half frozen and covered in snow too. Finding a small patch of sun we enjoyed lunch and a few attempted to dry out boots/socks a bit. We encountered a lot of rubbish left by campers, including empty drink cans. Walt in our group decided to collect up the cans to carry out of there and was rewarded with a full can of Heineken – nicely chilled too! We proceeded back cautiously over the snow and creeks and enjoyed getting back to Lindeman and the warm sun. Having worked up an appetite we stopped at Jacksons Steak & Grill in Chilliwack and all enjoyed an excellent meal. I would expect that it would be very difficult to reach Greendrop until the snow is completely melted, we were lucky that it was still relatively firm and we could walk across the top of it in most places but it was disintegrating rapidly.” 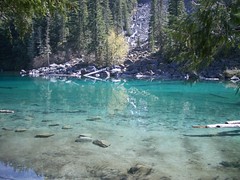