Steve on Leading Peak:
“The logistics for this trip rival that of a multi-day kayak excursion. I needed exactly 12 that wouldn’t bail, that were willing to pay big bucks for the water taxi and bible camp fee. I found exactly that with 1 spare that slotted perfectly when 1 team member came down sick. We had quite a range of abilities in the group but all made it to the peak with a stop at the “white spot” (a lookout). It wasn’t raining but it had earlier which meant crossing some slick moss rock verged on scrambling near the top. I honestly feel we would not have all made it had we not helped each other on this one. The views were panoramic, and the cloud level wasn’t a huge obstacle. Unlike Gardner or Artaban you literally could spin 360 and have an unobstructed view of the Sunshine Coast, Vancouver Island to the South and Sea to Sky. The hike wasn’t as hard as I had expected (on average), but some parts were very steep and tricky. The boat ride home at sunset was an added bonus.” 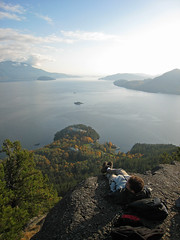