Carollyne on the Heather Trail:
“Dorothy, Astrid and I backpacked in to Kicking Horse Camp on the Heather Trail in Manning Park, then went for a further ridge hike with day packs. Later, Christian and others, including two late sign ups I had no car for, joined us at the camp, before continuing on their shuttle trip to Cayuse Flats the next morning. Amazing meadows in bloom, sunset reflections on the snowy peaks, and great company made this a very rewarding trip. The campsite was busy, with several tired groups, who didn’t see the randomly placed extra camp spots in the trees (we only discovered later), continuing on to Nicomen Lake 9 km away. Biting flies and mosquitoes tried to make meals of us, especially at the camp. There is now a bear cache at Kicking Horse (great!). However, cooking smells from all the other campers cooking at their tents was discouraging. Saturday, the trail was very crowded to about 7 km with many large groups of daytrippers, but Sunday was peaceful with only a few hikers and groups of backpackers.” 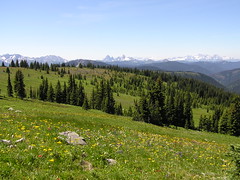