Stuart at Garibaldi Lake:
“Four of us set off heading up the 6+ km of switchbacks in 1½ hours. After a brief rest at the junction the group headed left and 20 minutes later arrived at Taylor Meadows. The sides of the trails are covered with alpine flowers and definitely worth adding the additional 2 km. Shortly later you have your first glimpse of Black Tusk, don’t forget to check the view behind you once in a while. Continuing along the path you eventually come to the junction for Garibaldi Lake, take a right heading down the switchbacks until you cross the bridge. The trail becomes fun and interesting as at some points you tip toe across rocks breaking the water’s surface to continue around the lake. You should explore the entire trail around the lake as besides the views of the glacier there are some interesting points. Firstly there is a small island accessible from the trail where there are some Indian Paintbrush plants. At the trail end by the ranger’s dock is not the best place to have lunch. The Whisky Jacks create a scene reminiscent of Alfred Hitchcock’s “The Birds”, it was quite bizarre. We headed back the direct route returning 9 hours later.” 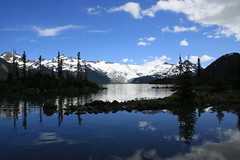