Rob M. at Garibaldi Lake:
“A delightfully challenging time was had by all, on this storybook day in Garibaldi Park. There were pods of hikers from many Vancouver clubs. Five of us set off on the Barrier stair-master for about 3 km, when crampons and snowshoes were donned for the slippery slope. Susanne, ski equipped, and I relented 1 km later. Just past the Taylor junction we went to breathe in the Barrier vista at its lookout. From there we gingerly descended into its gulley and out onto its lake. The lakes vistas were awesome. We followed some tracks across Lesser Garibaldi and gained the summer trail north of the creek. About 1 km later we descended directly onto Garibaldi Lake and immediately began to soak up its allure. Before the lake walk we ran into Club Treaders returning from the Burton Hut and on the return I ran into Jon and Chris heading up to Mount Price. Back to the parking lot, we kept mostly to the summer trail all the way to the local for a hoist.” 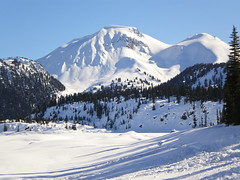