Eugene Y. on Frosty Mountain:
“Seven of us went to explore the legendary alpine larches in Manning Park. We parked at the beautiful Lightning Lake and proceeded along the well-maintained trail toward Frosty Mountain. The trail was in excellent shape and easy to follow. After a two-hour pleasant walk amid bright-red and yellow fall colours we had a lunch break at the Frosty Creek campsite. After another half-an-hour walk we finally reached the Larch Plateau and then continued along the partially snow-covered trail toward the mountain. The larches had just started to turn yellow, so the predominant colour was golden-olive. The snow on the ground was already partially covered by yellow needle-like leaves.

As we started climbing the slopes of Frosty, the snow got deeper and reached about 20 cm at places. However, the final walk along the ridge was mostly snow-free.
Finally, we reached the summit. The views on the surrounding partially-covered snow peaks were truly breathtaking!

The descend was was fairly straightforward, although some portions of the trail were a bit slippery. We didn’t use microspikes, however, we found hiking poles really helpful.

Some stats. At a leisurely pace while taking lots of pictures, it took us about 4.5 hours from the parking lot to the peak and 3 hours to get back to the car.” 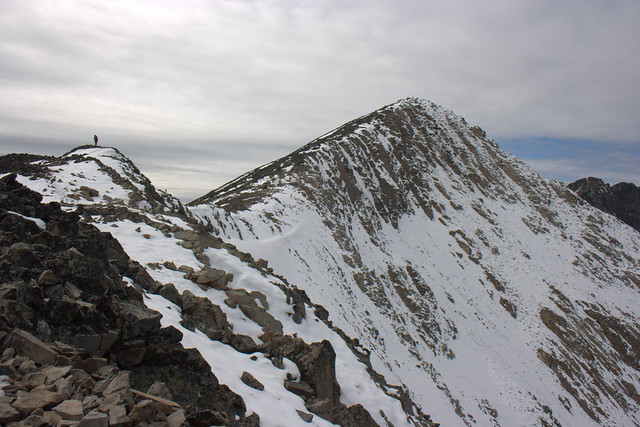