Carollyne at Elfin Lakes and Opal Cone:
“Six of us hiked with our backpacks to Elfin Lakes on a hot, clear day with spectacular views of the mountains and meadows. Although it was busy at Elfin Shelter, there were enough bunks in the shelter for all of us when we arrived there at 1 pm. After unpacking and having lunch by the lake, we hiked out to Opal Cone, which turned out to be a bit of an adventure. As we began our descent to Ring Creek, we met a couple of hikers turning back saying the trail was gone, others who had made it but warning us to get as much water as we could. We continued on and found the slope must have had a recent landslide as the descent was what might be called a goat track in soft, dusty moraine. We made it down and then boulder-picked our way across the first fork of Ring Creek, with wonderfully clear water, across more rock, then finally across the bridge over the raging second fork. Going up the incline, the group separated, with the three fastest hikers scrambling up a direct route with difficulty. Ted and I found, then lost, then found the marked route with its long switchbacks – which we all used on our return. Atop the ridge, a stunning contrast was before us, with a green and flower filled bowl and a lovely trail which we followed to the end of Opal Cone ridge. Four did the last scramble up to the snow filled crater, while the writer enjoyed the view and the pikas (much larger than Columbia Ground Squirrels). We returned, very tired, to a now very full Elfin Shelter, by 7:30 pm. A full moon, three lovely kids and choral snoring stand out as memories. Sunday morning, with light showers chasing us, we returned home, glad we endured the heat to see Opal Cone on such a brilliant, if hot, day.” 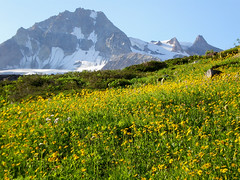