Tu Loan cycling up to Cypress Bowl:
“Emeric L. joined TLT in her third callout of the Triple Crown series. Because he had already ridden the ridiculous hill along 15th street as part of his commuting regiment, they started at the bottom of Cypress. After consolidating gear and discussing the water situation, as they both anticipated a hot and thirsty ride up the mountain, the peloton of two made their way up the mountain.

The trees provided ample shade much to the delight of the riders. Good conversation was to be had as Emeric imparted some much appreciated wisdom regarding race preparation. TLT soaked it in as she had 5 days to prep for a big race/event that she hadn’t been thinking much about. “Breathe from the stomach. Set your intentions. Visualize. Meditate.” The ride up was a great place to practice TLT’s breathing. Later, she figured it was a great strategy for Emeric to not have to listen to her talk!

The ride was definitely less daunting than anticipated (as predicted in the callout). At the 11 km mark, with TLT’s insistence, Emeric channeled his TDF French roots and blasted the last 4 km to the top. Literally. He blasted! TLT believed she heard a sonic boom. With him gone, she was able to set her intentions of consuming a cold beverage after the ride, visualize the pizza she was going to order, and breathe in the hot melting cheese. She figured the food-induced coma will help with her meditation. Emeric came back to pick her up and together they reached the chalet where they were greeted with much enthusiasm by mosquitoes. A quick picture was taken before they flew down the mountain.

Post-ride refreshments were enoyed at the Tap House in Park Royal. TLT had her pizza and beer just as she intended.

Thank you Emeric for another great ride! Now that TLT’s ridden all three local mountains, she will be looking to climb them all in one day! Look out for that callout!” 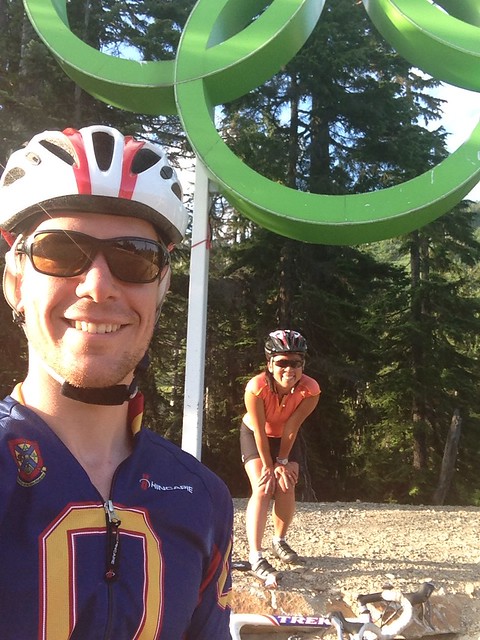