Eric A. on Cloudburst Mountain:
“Three of us decided to tackle Cloudburst. We decided the best access was from the Chance Creek FSR (turns off the 99 near the turnoff to Garibaldi Lake). Turns out this is definitely the best access, only about 7 km of driving on good open logging roads. Then on foot because the road is washed out about 2 km from the end, and gets really bushy the last 1 km. The route we chose began from the end of the overgrown logging road. We bushwhacked (after avoiding almost all the clearcuts by taking the old logging road) up and kept to the right once into the trees. This unmarked route skirts some cliff bands, and is generally quite steep and direct. We ended up in avalanche debris, and followed it up a valley. This could be a treacherous route if the avalanche hazard is significant. This valley ended up on a few ridges that led to the summit ridge. Unfortunatley it was a whiteout and windy on the peak. Late May – early June is an excellent time to do this hike! Crampons and an ice axe would be nice to have.” 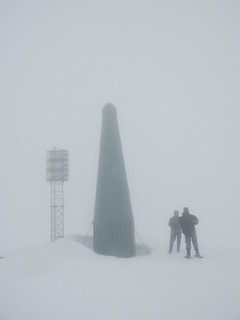