Evgeny doing Castle Towers in a day:
“Three of us joined in an effort to make a one day megahike to Castle Towers mountain. We started at 8:20 am and in 2 hours reached Helm Meadows campsite area. As we decided against the glacier traveling we went up Gentian Ridge along the moraine near Helm Peak. Instead of getting to the top of the ridge initially we started traversing it on the side, which was initially easier but ended up as a bad idea when the slope became too steep, so we ended up scrambling to the top of the ridge anyway. Ridge walking was easy though we noticed a strong wind that was making some difficulties to walk. We had lunch right after we bagged Fuscian Peak which is the highest bump along this ridge, which has about 5 or 6 bumps between the Helm Peak and the top of the Helm Glacier. It was a clear day with few clouds before we started descending to Gentian Pass. After that clouds covered most of the sky but we were lucky that all the rain passed us by.

We reached the top of Polemonium Ridge at 3:15 pm and realized that we need to go a substantial part down again to pass the gap between Polemonium Ridge and Castle Towers mountain itself. The descent was a nice-looking but unpleasant to scramble narrow gully filled with loose rocks that required careful walking to prevent stones to fall on the heads of people who were scrambling below. The slope of Castle Towers from the western side is a huge boulder field, which still had a last year snow fields on it. On the way up we went over the snow but on the way down we avoided them because they were shallow and steep. At 5:05 pm we summitted the west sub-summit spending 8 hours 45 minutes for ascent. We made a short break there for food and rest and went back soon after. The views were awesome but it was hard to take pictures because the wind was really strong. We made up the narrow gully before the sunset, which was at 7 pm.

Darkness fell when we were descending from Polemonium Ridge to Gentian Pass. Due to GPS visualization problems of long tracks we couldn’t trace our steps back so we used our own route finding and GPS map coordinates to get back to the car with head lamps. We got back on Gentian Ridge and scrambled our way under the gorgeous clear skies full of stars. Those skies were clear for a reason. The wind was very strong and at some mildly exposed sections of the ridge we were literally crawling to avoid being blown off the ridge. At 11 pm we stopped for a snack behind one of the bumps that protected us from the wind turned off the head lamps and enjoyed absolutely beautiful stars in the sky. Then we proceeded along the ridge looking for a convenient scramble down. That wasn’t easy with headlamps but we successfully descended to the meadows and at the midnight we were standing on the wide trail leading back to the parking lot. If we were going up for 2 hours, the way back down took us 3 hours 20 minutes. I didn’t feel very tired and had no blisters at all but soles of my feet were so beaten up by just stomping them for already 16 hours that it was unpleasant to step on them. I had no doubt that my companions felt at least the same. Nevertheless, we endured the last part of the hike in the dark forest and at 3:20 am after exactly 19 hours of hiking we were back at the car. Hey, that wasn’t all for me, I was driving back to Vancouver till 6 am… The driving was also epic but that’s another story. 🙂

Soundtrack of a hike: https://www.youtube.com/watch?v=rcv3FkL29IQ
For detailed report see: https://www.livetrails.com/report/3639/0/Castle_Towers_from_Helm_Creek“ 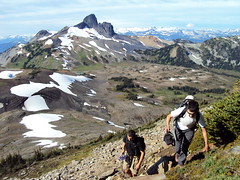