Dan on Black Tusk:
“Technical scrambles should ideally be attempted by experienced hikers; but not if you witness the woefully underequipped throngs that storm Black Tusk every summer. Thinking I would tread a middle ground, I took a mixture of seasoned scramblers & a few adept hikers who are otherwise new to scrambling to try to safely tackle this SWBC landmark.

Saturday morning found 10 joyful Wanderungers hiking up to the subalpine that are Taylor and Black Tusk Meadows – the flowers are now nearing full bloom and the mosquitoes minimal. We made good time, finding ourselves having lunch at the 1805 m mark looking at Garibaldi Lake and the surrounding high peaks at noon. One hour later and we were at Black Tusk base, awaiting our turns to have a go at the chimney.

Putting a lead, a middle, and a sweep in the climbing procession, all ten of us gave it a try in going up the chimney. After waiting out interminable streams of hikers both up- and down- climbing the chimney – and with me trying on the role of `traffic controller’ in the initial portion – the eight of us who cleared the chimney finally completed the 10-minute scramble to the top 1:15 after starting.

With a blue sky panorama at the top, we marvelled at the surrounding cirques, and at Cinder Cone below and other wondrous geological formations & glaciated peaks all around, all the while tirelessly clicking away at our cameras.

After lending assistance to an injured party (kudos to John K. for his advanced first-aid kit and training) we made our way down, mindful that storm clouds had started to move in. At around Black Tusk Junction, the sky emphatically opened up, with big bolts of lightning and thunder and torrential downpours making us sprint down to treeline.

In this well-matched group of blithe and seasoned hikers, a jovial and funtastic time was had by all and we carried the jolly-making to the Shady Tree Pub after. Out of that came an alluring idea for our next Black Tusk adventure: the Helm Creek Meadows approach. Can’t wait!” 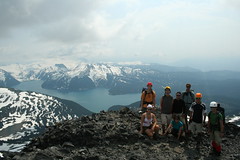