Tu Loan cycling to the Grouse Grind:
What does it take to entice a Bowen Islander to sign up for her first Wanderung activity? A Bike and Grind! Sarah G. showed up with her mountain bike to impress TLT, who was ecstatic that someone actually would want to join her on this callout! Sarah spun her way up to Grouse with ease as she channeled her former ironman and adventure racing days. TLT was in awe!

After about half an hour, they reached the parking lot. Transition from biker to hiker took about 7 minutes. The weather was cooperating and one could see patches of blue sky. This of course was all planned out by TLT. With her MapMyRide app, Sarah was eager to see how she would fare after a 7 year absence from the Grind. This is typical elite athlete attitude. TLT was just happy to have someone to chat with while doing the Grind.

The trail was not very crowded; although you had your usual Grinder with their Lululemon gear powering their way up and the casual tourist with their jeans and checkered shirts. The lighting was nice enough for a couple of pictures. Chatter about food and triathlons were animatedly shared, mostly with TLT asking all the questions. She was kindly told to go ahead to give Sarah some peace and concentration. By the three-quarter mark, the steepest section of the Grind, no chatter was heard as the two were eager to focus all their attention to the finish.

Reaching the top after under an hour AND a bike ride up, the two were elated with their efforts! They meandered their way to the grizzly enclosure to say “hi”. By then, the clouds broke and the beer and nachos (best post-workout combo EVER!) were enjoyed with a great view of the city.

The trip ended with a drop-off to Horseshoe Bay where Sarah was able to catch the 8:50 ferry. Thank you Sarah for making the Bike and Grind so much fun!” 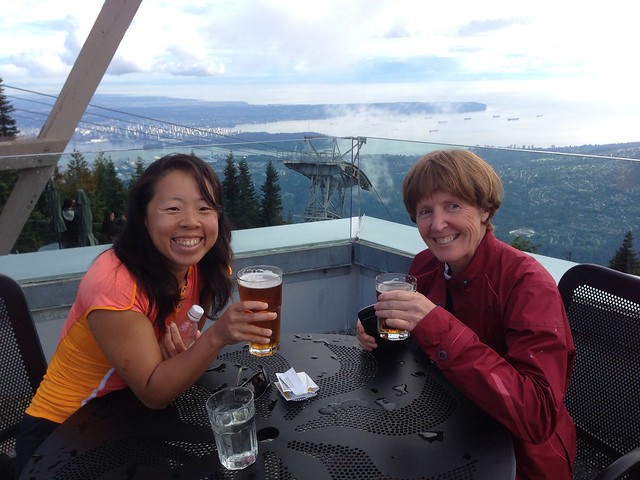